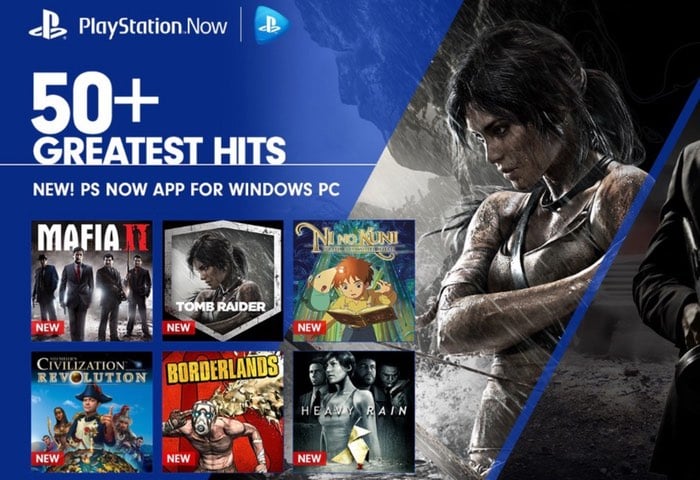 PlayStation gamers that have been patiently waiting for the ability to stream PlayStation games directly to their Windows PC, will be pleased to know that the support is now available.

To mark its availability, Sony has added six new games to its ever expanding library of PS now title with the addition of Tomb Raider Game of the Year Edition, Mafia II, Heavy Rain (with The Taxidermist DLC) and more.

James Martin Director of Marketing, PS Now explains a little more about the PS Now service and the new games :

PlayStation Now is the subscription service that lets you stream hundreds of games to your Windows PC and PS4. With a single subscription, you can play more than 400 PS3 games including PlayStation exclusives, greatest hits, acclaimed masterpieces, and games for the whole family. Visit PSNow.com to learn more, download the app or explore the full catalog of games.

– Mafia II — If you’re like us, you’re counting down the days until Mafia III hits PS4 on October 7. In the meantime, explore Vito Scaletta’s story with epic gunfights, visceral hand-to-hand combat, and thrilling vehicular exploration in Mafia II.

– Sid Meier’s Civilization Revolution — Become ruler of the world in your quest for global domination against history’s most intrepid leaders. Experience the vast re-playability and unmatched addictive gameplay that has become synonymous with the works of Sid Meier.

– Heavy Rain (with The Taxidermist DLC) — How far will you go to save someone you love? Experience a gripping psychological crime thriller filled with innumerable twists and turns, where even the smallest actions and choices can cause dramatic consequences.

– Borderlands: Ultimate Edition — Lock, load, and face maximum mayhem. Get the award-winning full game of Borderlands and all four explosive add-ons. Solve the mystery of the Zombie Island of Dr. Ned, challenge the baddest enemies in Mad Moxxi’s Underdome Riot, discover and liberate the spoils of the Secret Armory of General Knoxx, and fight against the brainwashed hordes in Claptrap’s New Robot Revolution.