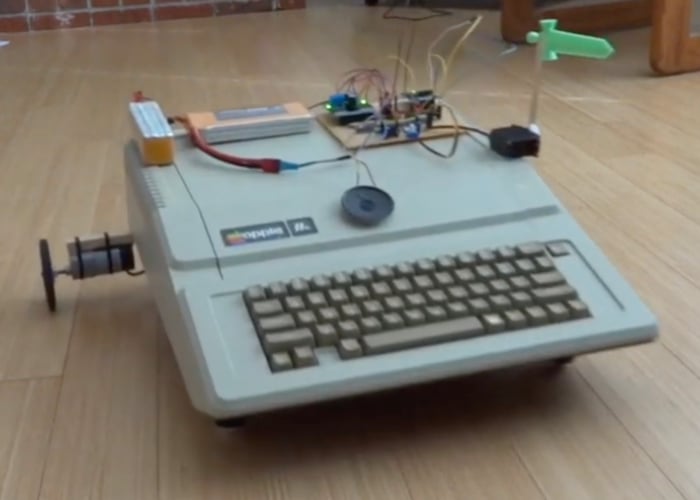 Programmer Mike Kohn has taken a vintage Apple IIe personal computer originally launched back in 1983 and transformed it into a programmable robot complete with wheels and 3D printed sword. The Apple IIe Robot has been inspired by “scary” killer robots seen in cheesy 1980’s sci-fi horror movies.

The Apple IIe Robot uses Apple BASIC to send commands to an onboard motor, which allows the robot computer to manoeuvre around its creators home.

“In order to make the project more authentic, I started with the ultra-intimidating 6502 based Apple IIe. I started by pulling out the power supply and making a circuit that could provide 5v, -5v, 12v, and -12v from a battery and created a motor control board. The motor control board runs on an ATmega368 connected to the Apple IIe through its joystick port and includes an Emic 2 voice synthesis module. At the top is a 3D printed sword (designed and printed by a former coworker) controlled by a simple servo motor. Code running on the Apple IIe is written in Apple BASIC and sends commands to the motor control board by bit-banging data over 2 output wires from the joystick port.”

Challenges experienced during the Apple IIe Robot build include :