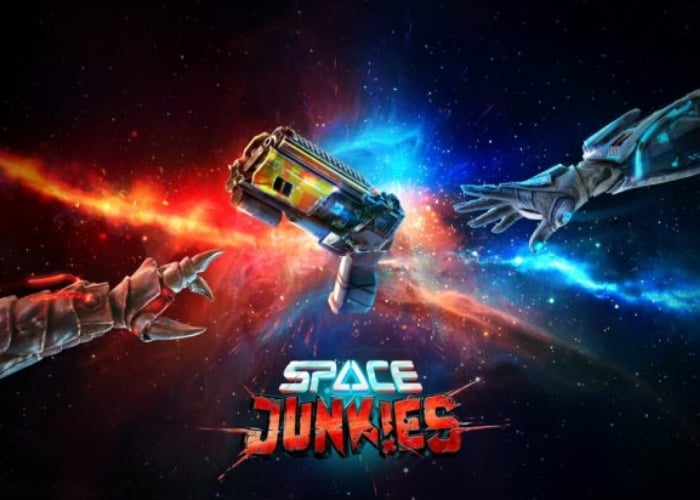 Adrian Lacey Producer at Ubisoft Montpellier has taken to the official PlayStation blog this week to reveal the first details on the new upcoming multiplayer jetpack arena, Space Junkies, designed specifically for the PlayStation VR platform. Space Junkies will be officially launching next month and available to play from March 26th, 2019 onwards.

Space Junkies gameplay allows players to navigate deadly orbital arenas, grabbing weapons and facing off against enemy players in “intense duels or treacherous free-for-alls solo”. The new virtual reality shooter provides both single player and multiplayer modes allowing you to team up with a partner in 2v2 battles. Check out the announcement trailer below to learn more about the new VR game coming to the PlayStation platform.

“Space Junkies is an FPS designed from the ground up to take advantage of all the wonders Virtual Reality can offer. Just as for many players, VR has been a new learning experience for the team. What struck us initially when testing Virtual Reality was the level of immersiveness it allowed. We decided that we needed a strong navigation system that should allow the player to fully take advantage of 360° of freedom and the new spherical spaces that VR provides. The manoeuvrability and overall fun-factor of the jetpack made it our top choice.

Navigating in Space Junkies grants the player a great deal of freedom of movement and strategy on how they decide to approach different situations. For example, do I fly straight into the action? Do I play more tactically using covers to sneak from below or above and surprise the enemy? Or should I maybe stake higher ground and cover my teammate while he goes in? VR adds a whole new dimension in terms of situational awareness and is a real game-changer for the FPS genre. You will need to keep your wits about you as contact can come hard and fast from any direction!”

For more details on the new VR multiplayer jetpack arena launching on the PlayStation platform next month jump over to the official PlayStation blog by following the link below.