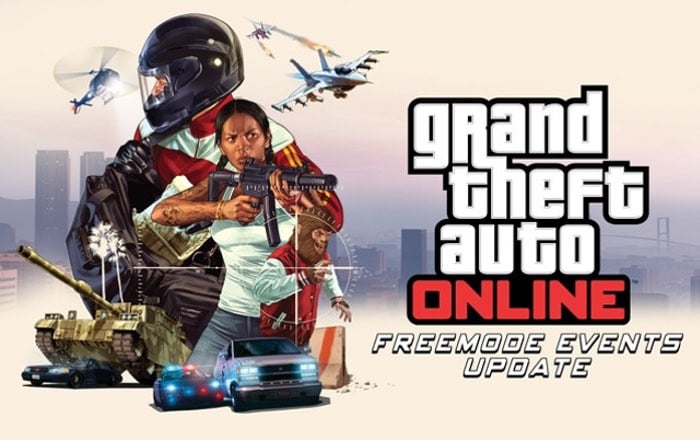 Rockstar has today announced that the new PlayStation 4 Freemode Events Update for Grand Theft Auto Online has now been made available as an automatic download for PS4 consoles.

The latest update for the GTA online game provides a new way to enjoy the online gaming experience, providing gameplay without the need for loading screens or lobbies as well as providing a wealth of new features.

The new update includes two new Adversary modes in the form of Cross the Line offering heavily-armed squad gameplay that face off across a neutral zone. The goal of the game is to get all team members strategically penetrate their opponents territory to claim victory.

Together with Hunting Pack during which players take part of a team tasked to deliver a priority vehicle rigged to explode if it drops below a minimum speed, while your opponents race, ram and batter to take it down, says Rockstar. Watch the GTA Online PlayStation 4 Freemode Events update launch trailer below to see what you can expect to enjoy once it’s been downloaded and installed on your PS4. Other features include :

Hunt the Beast : Become the Beast — a stronger, faster (and hairier) version of your character — and flee relentless pursuers all over Los Santos and Blaine County.

King of the Castle : An every man for himself turf war where you’ll need to ascend and claim the designated “castle” as your territory — and then fend off everyone else as they go all out to dethrone you.

Hot Property : Grab the briefcase and go! Jump into a car, bike, boat, motorcycle, P-996 Lazer or just run for the hills with the coveted contraband in hand. Be one of the three players who hold the briefcase the longest to score GTA$ and RP bonuses.

Moving Target : The first player to enter a marked vehicle will become the Moving Target, tasked with safely delivering the vehicle to a designated location. While the marked vehicles will be durable, it’ll take some serious elusive finesse to survive other players’ attempts to destroy you before the drop point.

Checkpoint Challenge : Compete with all your Freemode competitors in a mad dash across southern San Andreas. Who will be the first to race or fly through all the designated checkpoints for fame, fortune, and reputation?

For a list of all the features you can look forward to enjoying within the latest GTA online update jump over to the PlayStation blog via the link below.