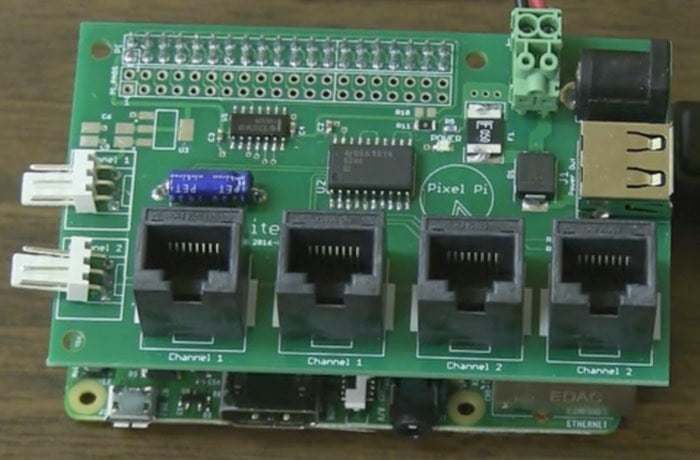 Raspberry Pi enthusiasts that are looking for an addressable way to control LEDs directly from their Pi mini PC, may be interested in the new driver board which has been created by Utah Imagineering.

The new Raspberry Pi LED driver board has been aptly named Pixels and can be used with the software from Falcon Christmas aka the Falcon Player. Watch the video below to learn more about this new LED Raspberry Pi driver board.

Pixels. Fun, colorful and just simply SO cool. For years I had thought about using a small microcontroller and three LEDs, package it behind a lens and using a one wire protocol to control. BUT someone else thought about it and came up with the WS series (among others) pixels! A clever design, each pixel re-driving the next, But there are some limitations, as most small controller boards (Arduino, PIC-BEE, RasPi) drive the outputs with 3.3V. So to solve this, a voltage translation is required to convert these signals to 5V and then make sure it can drive over longer distances.

PixelPi is designed to plug onto a RaspberryPi 2B or 3 and using the software from Falcon Christmas aka the Falcon Player (thanks to Jer Garff for the underlying code for the WS281x pixels) will drive two separate strings of pixels, each having two channels of two duplicates. In other words, each channels output is split into two 3V to 5V translations and further split into two more channels. RJ45 jacks are used for off the shelf CAT5 cables to drive the signals out, with each connector having an identical sets of signals. The CAT5 cable then plugs into an “End Point” where its split out to drive out the actual pixels. Cable lengths up to 100 feet have been tested. You end up with four driven strings of pixels with the identical patter, AND another four driven string with a different pattern. Just imagine the possibilities! The standard holiday lighting, signage, food trucks, etc!

For more information on the new Pixels jump over to the Kickstarter website via the link below where Pixels is hoping to raise $8,000 in funding to make the jump into production.