Pioneer has taken the wraps off a new in-car satellite navigation system it has been developing called Pioneer NavGate that offers drivers an augment reality view of directions as they are driving over laid on the windscreen of the vehicle.

The new Pioneer NavGate head-up display (HUD) is currently being showcases at the IFA event in Berlin this week and the display unit has been designed to attaches to the driver’s sun visor projecting information on to the windscreen. 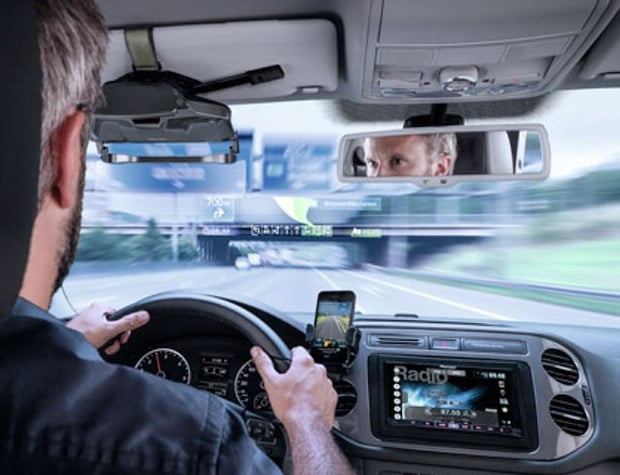 The Pioneer NavGate HUD uses a Digital Light Processor (DLP) projector to offer users high contrast and deep colour saturation, creating a 30-inch display, which is approximately 3 metres in front of the driver.

The NavGate HUD displays location information as a natural part of the landscape for more intuitive driving, says Pioneer who explain in their press release today.

“Research has shown that most drivers take a whole second to read the speed indicator in the instrument panel or to look at a mobile device. Pioneer’s NavGate HUD enables more focused driving by significantly reducing the time required by the driver to process the information they see. The driver’s eyes don’t constantly have to change between close-range and remote vision.”

The Pioneer NavGate HUD SPX-HUD01 will be available from October 2013 at Pioneer car audio dealerships priced at $600.