I just bought a new car and one of the things it doesn’t have is a Bluetooth hands free system built in. An awesome new radio has surfaced from Pioneer that is called the AppRadio and it runs an interface that looks like iOS and will tightly integrate the iPhone apparently. The idea is that the double-DIN unit with the large touchscreen will be able to show your iPhone content on the screen. 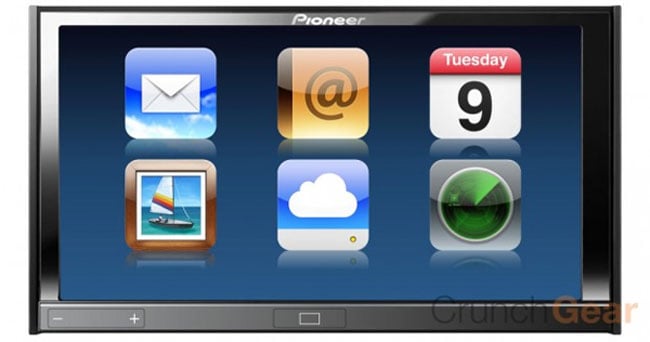 The full details aren’t available, but the radio crossed the FCC recently and it looks pretty cool. If it already has FCC approvals then it could be coming any time now packing that Bluetooth I am missing. The device would apparently rely on the iPhone for web connectivity and software. That is cool; I can certainly see me watching Hulu Plus on the screen streamed from my iPhone 4.

What’s not clear is if the thing has a touchscreen and if all the content from your iPhone is mirrored on the screen or what. The user interface of the radio is said to be much like that of iOS. I would think Apple won’t appreciate the likeness much and will be on Pioneer to change the radio if the AppRadio isn’t already approved in Cupertino.