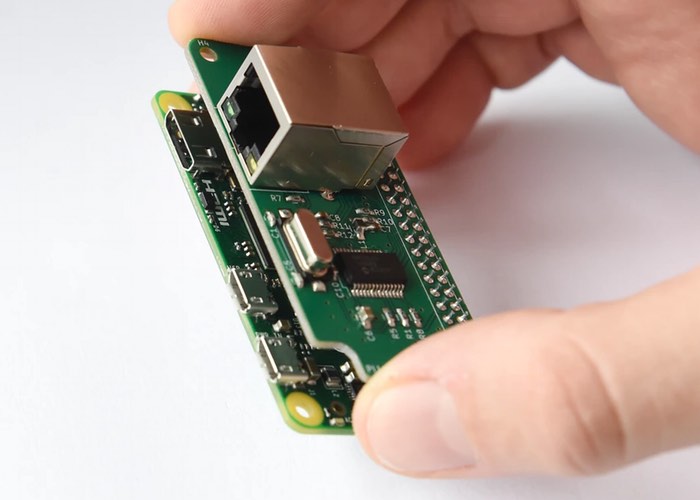 Raspberry Pi enthusiasts that have wanted to add an Ethernet connection to their new palm sized Pi Zero mini PC boards, may be interested in a new Raspberry Pi Zero Ethernet adapter which has been created by Marcel Hecko called the PiJack.

The PiJack has been designed to simply slot onto the top of the Raspberry Pi Zero and easily adds a 10Mbps Ethernet connection ready for a variety of new applications and Internet connection. Watch the video below to learn more about this tiny device which is now available to back from £13.

Raspberry Pi Zero is a new board from Raspberry Pi Foundation which retails for $5. This is a fully functional Linux system – similar to Raspberry Pi 2 and although it lacks many ports we can live without, we can’t live without without Internet access.

PiJack is an add-on board you plug on top of your Raspberry Pi Zero which adds Ethernet functionality to your $5 system, therefore you can use the traditional Ethernet / Internet cable to connect your RPI Zero to the network (Internet).

We aimed for low-cost solution and ease of installation and therefore went for trusty ENC28J60 ethernet chip, which is only 10Mbps, but super simple to install and to use with Raspbian. The only thing that needs to be done is add one config line into one file on SD card your Pi boots from. And thats it. With Raspbian Lite version you get internet using DHPC on the next boot. Automagically.

The PiJack project is currently over on the Kickstarter crowd funding website looking to raise just £4,597 in pledges to make the jump from concept to production.

So if you think PiJack is something your Raspberry Pi Zero mini PC or projects could benefit from, visit the Kickstarter website now to make a pledge from £13 for the kit or £17 fully assembled and help PiJack become a reality via the link below. If you found this article interesting you might also be interested in this list of awesome Raspberry Pi Zero projects we have put together.