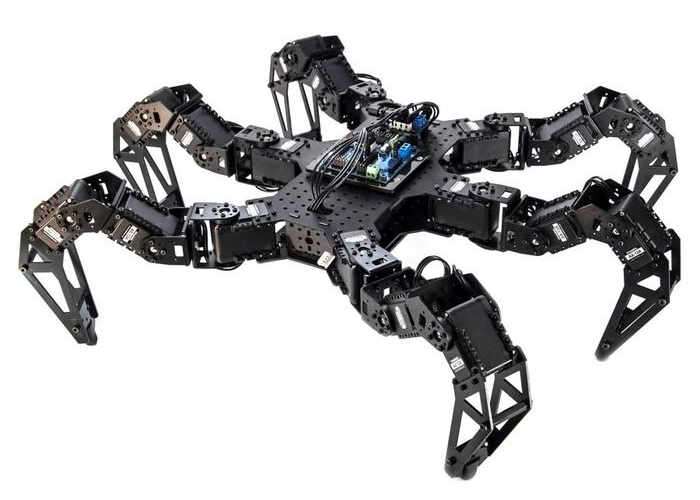 If you fancy building your very own pet Hexapod you might be interested in this open source PhantomX Hexapod MK-III which has been created as the third major revision of the popular research level hexapod robotics platform by InterbotiX Labs.

Check out the video below to learn more about the PhantomX Hexapod MK-III project which is OSHWA defined open source and is equipped with 6 fully articulated legs built around the advanced AX-12 and AX-18 DYNAMIXEL actuators.

The PhantomX Hexapod MK-III was designed with educators and hobbyists in mind, offering a top of the line research platform at an affordable price. Anyone can jump head first into the world of robotics using our open source Inverse Kinematics (IK) Gait Engines, wireless command protocol, and Arbotix controller.

This guide is for the newest version of the PhantomX Hexapod MK-III. In addition to numerous design improvements over our MKII model, we are excited to release the robot as an entirely open source platform, complete with 3D cad models of the robot, open software, and schematics for the electronics.

These hexapod kits are the collaborative effort from some of the top talent in the robotics community: Next-Gen AX series DYNAMIXEL robot servos, the ArbotiX-M Robocontroller, and a fantastic open-source development system make this an extremely durable and versatile robot that will grow with you as you learn more and more about robotics.

**All code is released under GNU GPL v3 (unless another OS license is specified) and 3D physical models licensed under a Creative Commons Attribution-ShareAlike 4.0 International License