For the record, these heels look like torture. If we’re not mistaken, in the pantheon of women’s footwear the Yummy Mummys (terrible name) are wedges but have stiletto design features. So that makes it a hybrid? We’re not going to over think them but holy smoke, the Yummy Mummy heels look agonizing to wear–but what am I, a man, to judge female footwear? 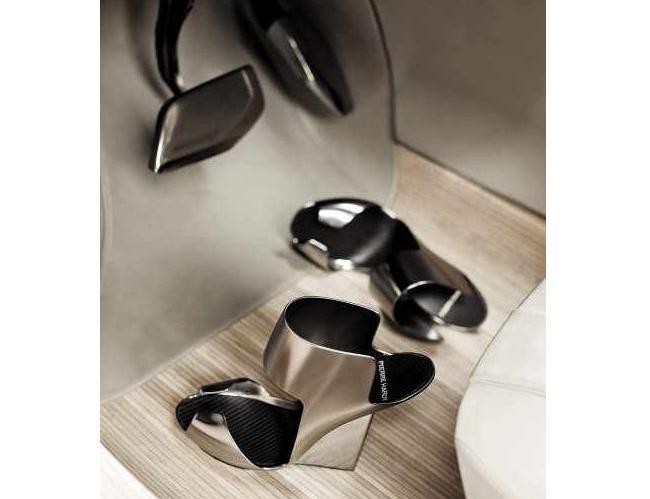 Apparently a pair of Yummy Mummys goes together with the new Peugeot HX1, a most beauteous car from the French automaker. Falling under the category of a mult-purpose vehicle, the HX1 constitutes a dramatic reinvention of a family car often driven by married women with kids.

The incredible part is as a marvel of design, the interior of the HX1 looks like it could double a s a starship. But it’s not really the HX1 that we’re concerned, since it’s status at the moment is ‘coming soon.’ It’s the pair of heels—the Yummy Mummy. We’re not the most fashion conscious lot but the out of the box styling on these shoes is formidable.

Equal parts heavy metal fashion statement and futuristic footwear, these novelty shoes give the impression they were forged into being. Could dainty female feet survive wearing them? We guess so. Women are amazing.*

*This is a conscious effort to stroke the egos of any women reading this post.