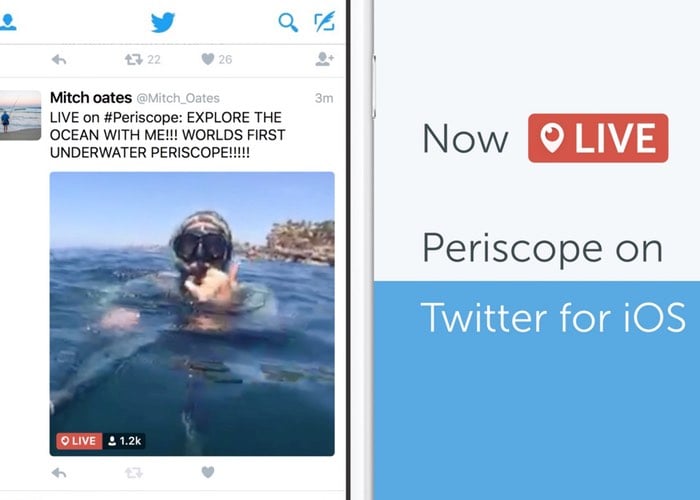 Periscope the Twitter owned live video streaming app will now play automatically in your Twitter feed, rather than simply providing a link to the broadcast as before, it has been announced today.

The new autoplay feature for Periscope within Twitter feeds will be launched via the Twitter iOS application first and is currently in the process of being rolled out, but will take in a few days to be available on all accounts, says Twitter.

The new features will also be rolling out to Android smartphones and the Twitter website in the near future, but at the moment Twitter has not released a confirmed date and states that the Periscope integration will be available “as soon as” it’s ready.

We’ve always wanted to make it as easy as possible to watch and broadcast live video. See the world through someone else’s eyes — that’s been our mission since day one. Today, we’re bringing this vision directly into Twitter by making it possible to watch broadcasts without leaving the Twitter app.

Since launch, there have been over 100 million broadcasts created on Periscope. Whenever a broadcast is shared on Twitter, you tap the link to open the Periscope app. Today, we’re replacing those links with the broadcast itself, autoplaying right within the Tweet. And when you tap the video, it goes full-screen and shows Periscope comments and hearts from other viewers. You don’t need the Periscope app or even a Periscope account.

Imagine scrolling through Twitter, reading about Mitch Oates’ underwater adventures. You suddenly find yourself peering through a hole in your timeline out into his world, via his live broadcast. This adds a whole new dimension to Twitter.

Jump over to the Periscope blog for more details via the link below.