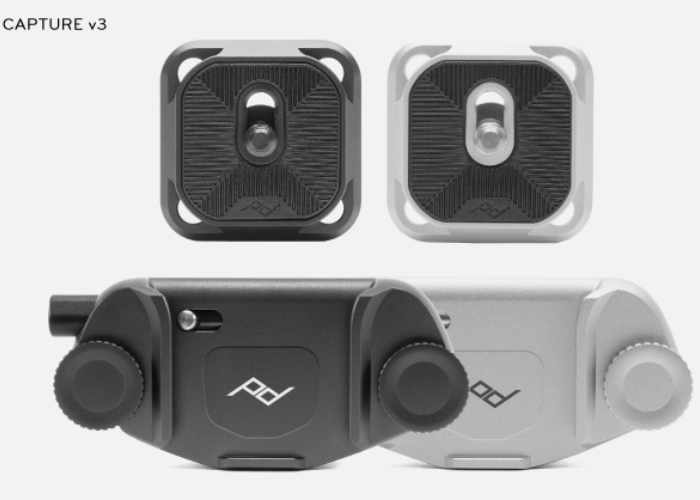 With just 3 days remaining on their Kickstarter campaign, the development team at Peak Design are edging closer to raising $500,000 via Kickstarter for their next generation redesigned camera carrying clips which take the form of the Capture, Slide, and Slide Lite. The original version also launched by Kickstarter started the company which is now progressed into creating everyday backpacks which raised $6.5 million in a recent crowdfunding campaign. Check out the video below to learn more about the latest refined design.

The developing team behind the Peak Design Capture, Slide, and Slide Lite explain more about its third redesign and inspiration:

It’s a metal clip that lets you rigidly carry any camera on your backpack strap, belt, or bag. Take your camera more places, keeping it secure and instantly accessible. Our new design is made of beautiful machined and anodized aluminum, and is smaller, lighter, more durable, and more comfortable than ever before. There’s a also new Pro Pad for heavy rigs or all-day carry. They’re the world’s most quick-connecting, versatile, stable, and comfortable pro camera straps, one for DSLRs and one for mirrorless. All hardware and materials have been updated for better comfort, smoother operation, increase durability, and gorgeous aesthetics.

There are a million straps, harnesses, and holsters out there for carrying cameras, and none of them met our needs. They were bulky, flimsy, frumpy, floppy, and frustrating. We knew we could do better. You (our Kickstarter backers) brought Capture, Slide, and Slide Lite to life several years ago, and those earlier versions are really, really great products. Since then, we’ve learned tons, and we knew we could make these core products even better. Our backers demand the best, and we feel inclined to give ya’ll just that.

For more information on the third generation of camera carrying clips jump over to the official Kickstarter campaign page by following the link below. Pledges are available from $35 for the Slide Light with the Capture v3 available from $55, with shipping expected to take place next month, just in time for the holiday season.