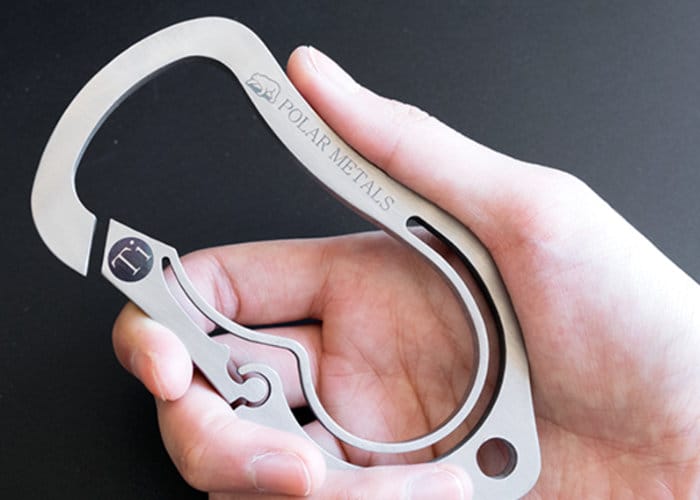 Carabiners are great for a wide variety of different applications even though they are predominantly designed for use while climbing. Polar Metals Based in Houston Texas has created a new “Bad Ass Carabiner” constructed using 64g of solid titanium to provide an oversized carabiner which uses the tension of its metal materials rather than additional springs to create the locking mechanism. Obviously this has been designed for climbing but the giant Titanium carabiner can be used for ovine variety of different applications and is capable of lifting a large amount of weight.

Features of the titanium carabiner include EDM construction from a single piece of Titanium without any complicated parts. Offering a carabiner that is constructed from a single piece of Grade 5 Titanium. Watch the demonstration video below to learn more about the titanium carabiner which is now available to back via Kickstarter from $79 or £57 for the first 20 super early bird backers. If all goes well in the Kickstarter campaign raises the required funds worldwide shipping is expected to start next month during April 2018. “No springs or levers, it’s open or closed with its own metallic tension”

For more specifications and a full list of all the available pledges jump over to the official Kickstarter crowdfunding campaign page by following the link below.