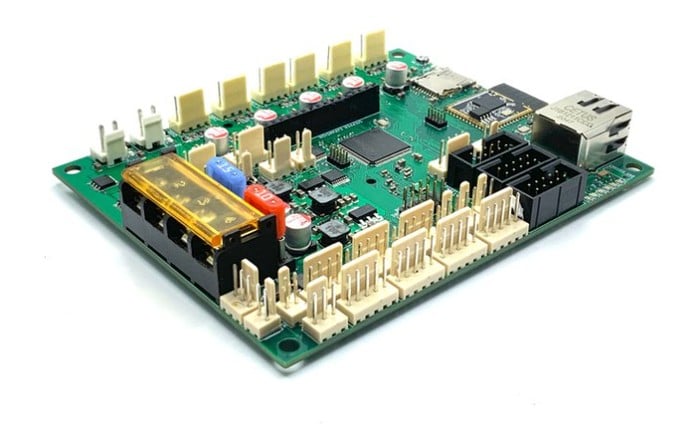 Makers, hobbyists and 3D printing enthusiasts that would like to upgrade their existing system may be interested in a new open source ESP32 3D printer controller called the Phi Mainboard 5LC which will soon be available to purchase from the Crowd Supply website. The 3D printer board includes integrated Ethernet and Wi-Fi and provides a web interface to configure and control your printer, upload G-code files, and start and monitor your prints.

Even though Phi’s feature set is geared toward 3D printers, it can also be used to drive other digital-fabrication machines, such as CNC machines.

“Phi runs RepRapFirmware, a firmware that has a huge legacy in the 3D-printing world and that is credited for introducing numerous advancements. It supports most machine kinematics. More importantly, this means there is no need to rebuild when configuring Phi for your machine. Most settings in the firmware, especially those related to kinematics, are configured using G-Code, so you can even make changes on the fly!”

“Aside from its powerful brains and flexible network connectivity, Phi is a fully-featured controller board. It is built on a four-layer, 123 mm x 100 mm board with two-ounce copper outer layers for better heat dissipation of stepper drivers and power MOSFETs. “

For more information on the Phi Mainboard 5LC open source ESP32 3D printer controller before it becomes available to purchase on Crowd Supply jump over to the official product page by following the link below.