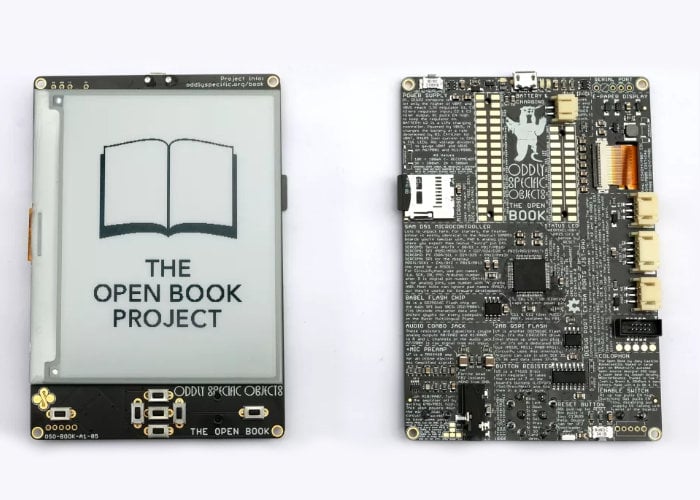 Joey Castillo developer of the Open Book Project has this week announced that the next DIY Open Book DIY eReader will be powered by the new Raspberry Pi Pico microcontroller launched last month. The Open Book Project provides all the instruction you need to be able to build your very own DIY eReader, albeit with 114 different components. Although the next version will be slightly more accessible using 35 to 45 parts depending on the features you would like to include. The Raspberry Pi Pico microcontroller costs just $4 and is powered by the Foundations RP2040 microcontroller featuring a 133 MHz dual-core AQM Cortex-M0+ processor, and was designed in-house by the Raspberry Pi Foundation.

“Castillo calls the new Pico-based eReader the Open Book Abridged Edition and like other versions of the Open Book, it included a custom printed circuit board that has documentation written on the board itself, explaining how power, battery, input and output, buttons, and other features work. There’s even a guide that explains what each of the board’s GPIO pins does and information about where the additional hardware should be soldered to the board and how it works.”

“As a society, we need an open source device for reading. Books are among the most important documents of our culture, yet the most popular and widespread devices we have for reading — the Kobo, the Nook, the Kindle and even the iPad — are closed devices, operating as small moving parts in a set of giant closed platforms whose owners’ interests are not always aligned with readers’.”

“The Open Book aims to be a simple device that anyone with a soldering iron can build for themselves. The Open Book should be comprehensible: the reader should be able to look at it and understand, at least in broad strokes, how it works. It should be extensible, so that a reader with different needs can write code and add accessories that make the book work for them. It should be global, supporting readers of books in all the languages of the world. Most of all, it should be open, so that anyone can take this design as a starting point and use it to build a better book.”

Unfortunately, no information on pricing or worldwide availability has been released as yet for the new Open Book DIY eReader, but as soon as information comes to light, we will keep you updated as always.