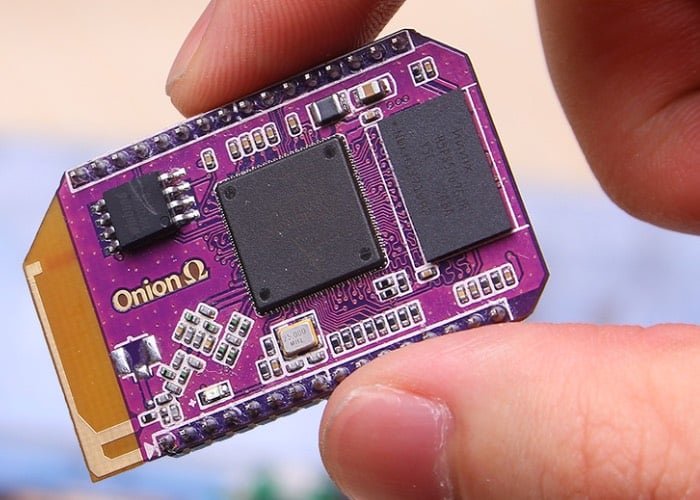 Makers, developers and hobbyists that enjoy creating projects for the Internet of Things, may be interested in a new development board that has been created called the Onion Omega.

The Onion Omega measures just 28mm x 52mm in size and comes supplied running the OpenWRT Linux operating system and is powered by a 400MHz processor supported by 64MB DDR2 and 16MB of internal Flash storage.

Other features of the Onion Omega include 802.11 b/g/n wireless connectivity and 16 GPIO ports as well as the ability to use Python, Node.JS, PHP, Ruby, Lua and more. Its creators explain a little more :

“Omega is an invention platform for the Internet of Things. It comes WiFi-enabled and supports most of the popular languages such as Python and Node.JS. Omega makes hardware prototyping as easy as creating and installing software apps.

Since the Omega is so compact, it can be hard to work with. That’s why we have designed the Dock that exposes commonly used interfaces, such as USB, power supply, RGB LED, push buttons and makes it easy to connect accessories to the Omega. Simply plug the Omega in and start hacking!”

For more information on the new Onion Omega designed for the Internet of Things jump over to the official website for details before the development board launches in the coming weeks over on the Kickstarter crowd funding website.