At NVIDIA’s GPU Technology Conference in San Jose this week, the company has taken the opportunity to announced the launch of their new NVIDIA Volta Next Generation GPU Platform.

The announcement was made by CEO Jen Hsun-Huang who also unveiled the roadmap for the released and development of the GPU. 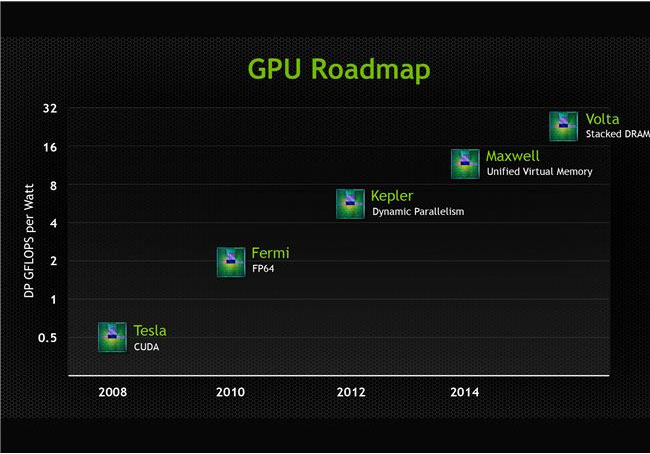 The new NVIDIA Volta Next Generation GPU platform is expected to arrive after the Maxwell family of processors in 2014. The Volta GPU platform has been named after Alessandro Volta, the physicist credited with the invention of the battery.

Other than its name not a lot else has been revealed about the new NVIDIA Volta GPU platform, but the AnandTech website explains:

“Volta’s marque feature will be stacked DRAM, which sees DRAM placed very close to the GPU by placing it on the same package, and connected to the GPU using through-silicon vias (TSVs). Having high bandwidth, on-package RAM is not new technology, but it is still relatively exotic.

The advantage of stacked DRAM for a GPU is that its locality brings with it both bandwidth and latency benefits. In terms of bandwidth the memory bus can be both faster and wider than an external memory bus, depending on how it’s configured.”

For more information on the new NVIDIA Volta GPU jump over to the AnandTech website for details.