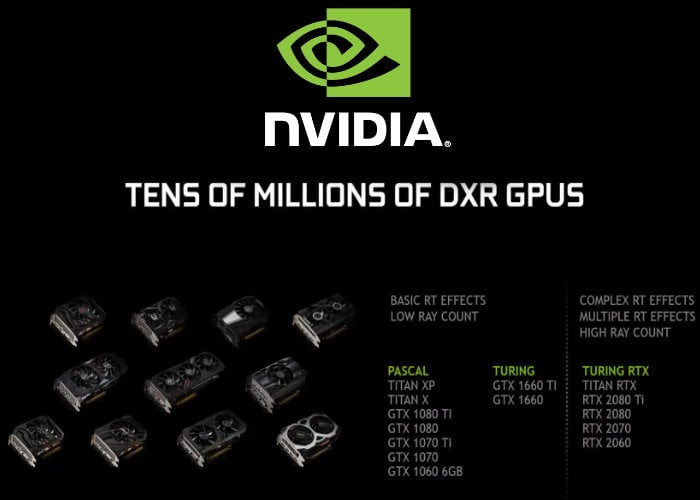 Earlier today NVIDIA held one of their their longest GTC keynote ever, lasting approximately three hours. During which the company unveiled their new Jetson Nano mini PC and announce that NVIDIA would allowing rudimentary DXR ray tracing support to older hardware that do not support RT cores.

“NVIDIA claims that DXR mode will not run the same on Pascal GPUs relative to the new Turing GTX cards, primarily given how the Pascal microarchitecture can only run ray tracing calculations in FP32 mode, which is slower than what the Turing GTX cards can do via a combination of FP32 and INT32 calculations. Both will still be slower and less capable of hardware with RT cores, which is to be expected. An example of this performance deficit is seen below for a single frame from Metro Exodus, showing the three different feature sets in action.”

As soon as more information is announce confirming the release date for the new NVIDIA update we will keep you informed as always. But for now to learn more about the new NVIDIA DirectX Raytracing (DXR) support jump over to the Tech Power Up website by following the link below or watch the full keynote via the NVIDIA website here.