Back in July, Nokia unveiled a 4.7-inch smartphone with mid-range specifications known as Nokia Lumia 625. The large screen handset aimed for emerging markets like India and came with an affordable price tag. In India, Nokia Lumia 520 managed to take the top spot when it comes to Windows Phone handsets, and it seems that Lumia 625 could be the next big thing on Indian shores.

The handset was released in India in September and within a month, it manages to grab a Window Phone market share of 3.1 percents, surpassing the high-end Lumia 920, according to AdDuplex data. If the growth continues, it could reach the top five next month, but it might take a while for the handset to take over Nokia Lumai 520 — we doubt it will. 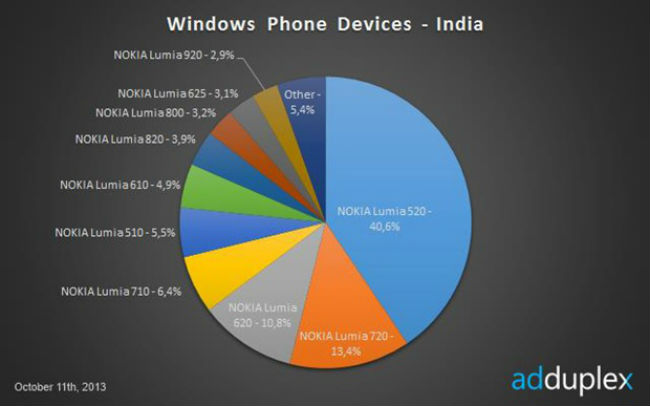 Nokia Lumia 625 gains a decent market share in such a short span of time. However, it might take some time for the handset to come close to Lumia 520, which is crowned as the most popular and best-selling Windows Phone handset. In fact, it’s not just the best-selling device in Windows Phone category, but the entire Windows category that also includes PCs and tablets.