Nokia and JBL have joined forces to create a new range of audio accessories, and have unveiled their first creation in the range today, in the form of the JBL PlayUp Portable Wireless Speaker for Nokia.

The brightly coloured JBL PlayUp speakers can use NFC technology to connect to devices, and have been designed to provide 360 degree sound. 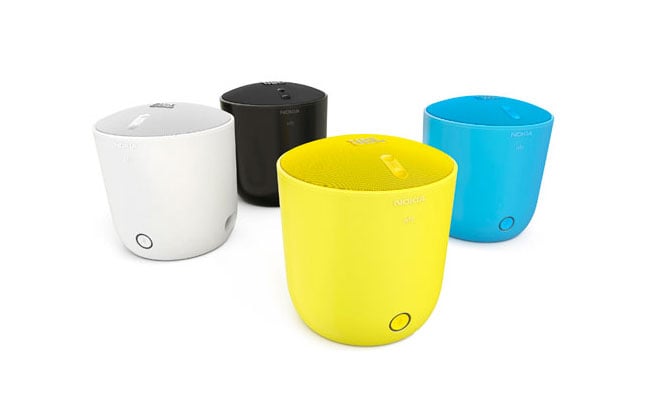 The Next-generation Lumia smartphones which is equipped with NFC connectivity and will arrive running Windows 8 will be a perfect match for the speakers. Although Bluetooth is also supported and a 3.5 mm cable is provided for connecting other devices.

The JBL PlayUp speaker measure 118 x 118 x 128mm in size and weighs 750g, on a full charge its internal battery is good for around 10 hours of playback, but an AC adapter is also provided for longer sessions and to re-charge them.

The JBL PlayUp speakers are capable of pumping out 89dB of power and have a frequency response is rated at 85Hz – 22kHz (-6dB), and will be arriving in stores before the end of the year and for around €149.