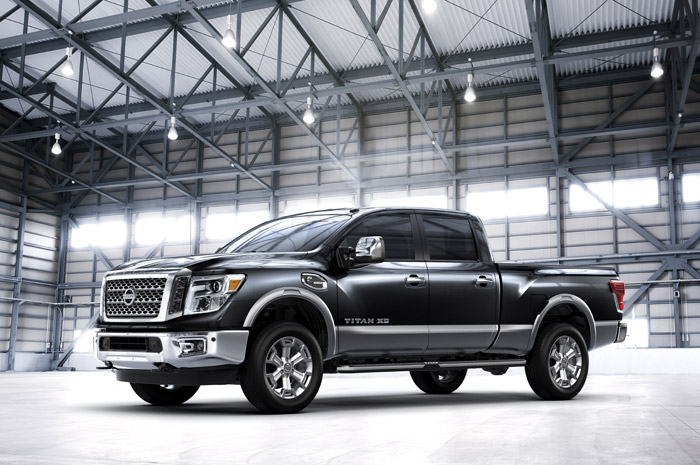 Back in November, we caught a glimpse at a camouflaged version of the new Titan pickup from Nissan. This week Nissan has gone official with the new Titan XD and the truck gets a refreshed front end and a new powerful engine option. The Titan XD has an available 5.0L Cummins turbo diesel engine that allows the truck to tow up to 12,000 pounds when properly equipped.

Nissan says that the Cummins diesel engine allows the Titan XD to sit in the gap between a light-duty truck and a heavy-duty offering. The front end of the truck is much more upright and reminds a bit of the popular Ford F150. Nissan also wants to be sure that potential buyers know the truck was designed and built right here in the US.

Nissan will offer a number of safety and convenience features in the truck with a RearView monitor with trailer guides. The diesel option won’t be the only available in the new Titan XD, a gas V8 and a V6 will be available as well. Pricing hasn’t been unveiled, but considering a loaded Titan Pro-4X already runs in the mid $40,000 range, the new truck with Diesel power is likely to be more expensive than that.