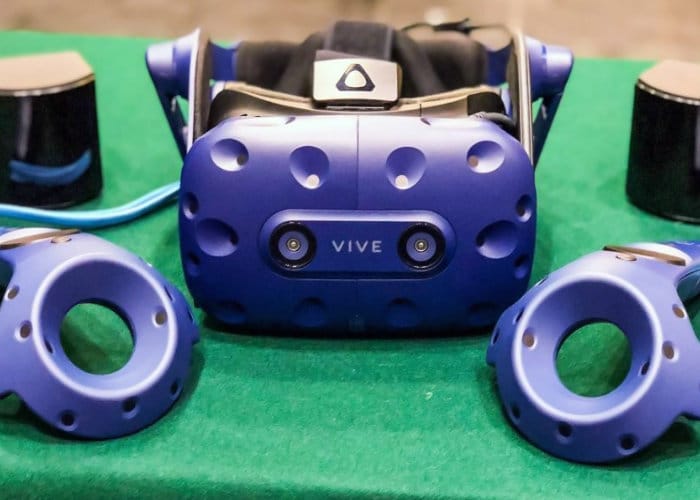 Following on from the unveiling of the new HTC Vive Pro headset during this year’s CES 2018 technology show, which took place in Las Vegas earlier this month. A new photographs have been released showing the virtual reality motion controllers of the new HTC Vive Pro, finished in their distinctive blue colour. As well as a first glimpse at the new SteamVR 2.0 tracking base stations (in the background) which will also be launched hopefully sometime during 2018.

Very little is known about the specifications of the new HTC Vive Pro virtual reality headset, but what we do know is that it will provide a higher resolution when compared to the current HTC Vive headset. The Pro VR headset will also support the new SteamVR 2.0 base stations, second generation base stations offering a number of advantages over the originals. Including providing VR gamers with a larger play space measuring up to 33 x 33 ft thanks to the ability to link four 2.0 base stations together.

The HTC Vive Pro headset and second-generation VR controllers will be backwards compatible with the first generation base stations that shipped with the original Vive. But you won’t see the major benefits of the Pro headset unless you use the specially designed SteamVR 2.0 tracking base stations. Unfortunately, these won’t be backwards compatible with the original Vive.

Vive has not yet announced any confirmed release date or pricing for the new HTC Vive Pro headset and controllers, and Valve has not announced a date when the SteamVR 2.0 tracking base stations will be made available. Although everything is expected to be launched sometime during 2018. As soon as more information becomes available we will keep you up-to-date as always.