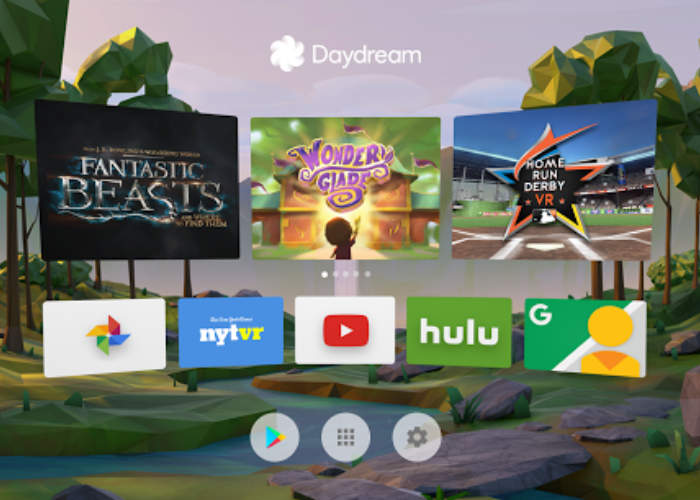 Some new Google Daydream View apps that will be available at launch include a VR-style video player, Google Street View, interactive apps from the BBC and more. as well as the official Daydream app which is required to use the headset with your compatible Android smartphone.

• CNN VR presents an VR-style video player that lets you watch both 2D videos on a virtual big-screen display and 360 degree videos that you can explore from any angle
• Google Street View lets you explore remote (or nearby) locations captured by Google’s Street View cameras
• Fanastic Beasts is a companion app to the upcoming Warner Brothers movie set in the Harry Potter universe, allowing you to “meet and interact with beasts.”
• The Guardian VR takes you on virtual tours of locations including the London sewer system.
• The Turning Forest is an interactive story from the BBC.
• Mekorama VR is a puzzle game that lets you solve levels using a Daydream headset and controller.
• Hunters Gate VR is an arcade/shooter game for VR headsets.

Daydream brings high quality virtual reality (VR) to Daydream-ready phones. With the Daydream app, you can launch your favorite virtual reality experiences and browse from an ever-growing collection of apps and games. Explore new worlds, kick back in your personal VR cinema, and play immersive games that put you at the center of action. Plus, the app brings featured content front and center so there’s always something fresh to return to when you put on the headset.

Features of the official Daydream app include :
• Set up a Daydream-ready headset and controller
• Browse and install apps on-the-go or in VR
• Launch your favorite Daydream experiences