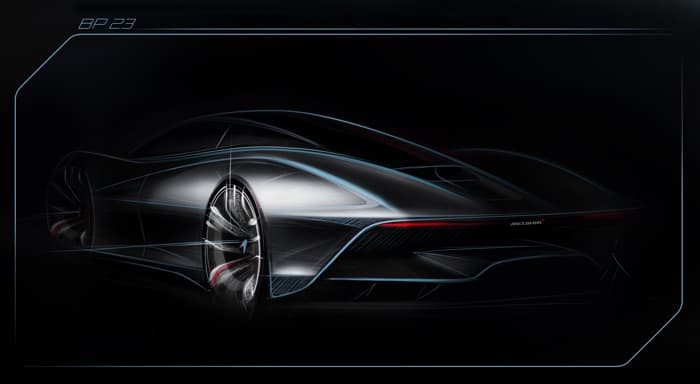 It looks like the new McLaren Hyper GT will be the companies fastest supercar to date, The company has revealed that their new BP23 supercar will have a top speed which exceeds 243 miles per hour or 391 km/h.

Just 106 units of this new McLaren Hyper GT supercar will be made, all 106 of them have already been sold for £1.6 each plus taxes.

“McLaren Automotive today confirms that its forthcoming new ‘Hyper-GT ‘, codenamed BP23, will achieve the highest top speed of any McLaren yet with the capability to exceed the 243mph peak speed of the legendary McLaren F1 road car. The news follows the announcement by McLaren Automotive CEO, Mike Flewitt during the Geneva Motor Show press conference that a public reveal of the car can be expected this year.

The next addition to the McLaren Ultimate Series will be both the fastest-ever and the most luxurious McLaren. Featuring a three-seat cockpit design with a central driving position – the same layout as the F1 – and a petrol-electric hybrid powertrain, BP23 will deliver the unparalleled blend of extreme performance and sporting luxury that befits its status as the ultimate road-going McLaren.”