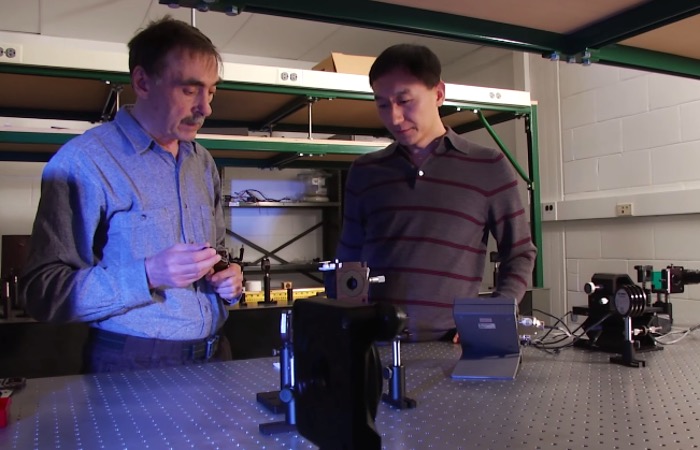 Researchers and scientists at the University of Rochester have been able to invent a new laser patterning system to transform metals into materials with new properties, creating super hydrophobic metal, that is capable of repelling water with ease.

The system is so effective that the water literally bounces off the super hydrophobic metal surface when it has been laser etched. Providing a more robust and resilient protection when compared to liquids repellents that can be applied to the surface. Watch the video below to see the hydrophobic metal action.

The laser etching process creates an intricate pattern of micro- and nanoscale structures to repell the water, scientist Chunlei Guo explains : “The material is so strongly water-repellent, the water actually gets bounced off. Then it lands on the surface again, gets bounced off again, and then it will just roll off from the surface”.

Chunlei Guo and his colleague at the University’s Institute of Optics, Anatoliy Vorobyev, describe the powerful and precise laser-patterning technique the team has developed in the video below :

“The materials Guo has created are much more slippery than Teflon—a common hydrophobic material that often coats nonstick frying pans. Unlike Guo’s laser-treated metals, the Teflon kitchen tools are not super-hydrophobic. The difference is that to make water to roll-off a Teflon coated material, you need to tilt the surface to nearly a 70-degree angle before the water begins to slide off. You can make water roll off Guo’s metals by tilting them less than five degrees.

As the water bounces off the super-hydrophobic surfaces, it also collects dust particles and takes them along for the ride. To test this self-cleaning property, Guo and his team took ordinary dust from a vacuum cleaner and dumped it onto the treated surface. Roughly half of the dust particles were removed with just three drops of water. It took only a dozen drops to leave the surface spotless. Better yet, it remains completely dry. “

For more information on the new hydrophobic metal jump over to the paper published this week in the Journal of Applied Physics.