iFixit has been busy once again this week and has already taken their tools to the New HTC One M8 smartphone revealing its inner workings to the world.

During the New HTC One M8 teardown iFixit encountered a number of problems trying to just get into the case. Explaining that it was very difficult, although no longer impossible, to open the device without damaging the rear case. 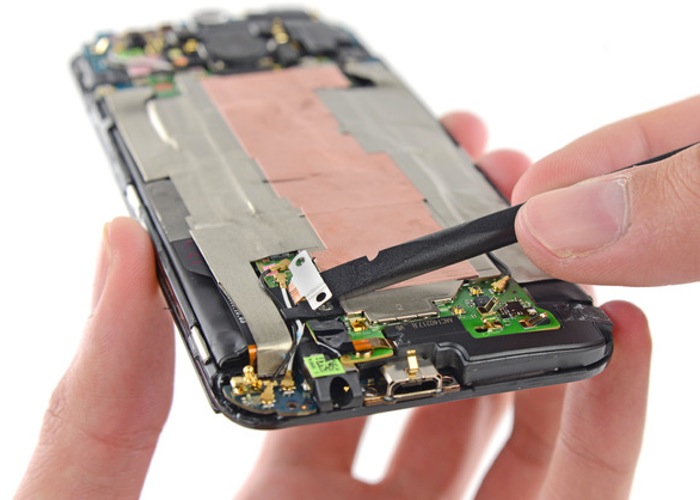 iFixit awarded the New HTC One M8 smartphone a repairability Score: 2 out of 10, where 10 is easiest to repair. Other comments whilst dismantling the M8 smartphone included :

– The battery is buried beneath the motherboard and adhered to the midframe, hindering its replacement.
– The display assembly cannot be replaced without tunneling through the entire phone. This makes one of most common repairs, a damaged screen, very difficult to accomplish.
– Copious amounts of tape, adhesive, and copper shielding make many components difficult to remove and replace.

For the full iFixit New HTC One M8 smartphone teardown jump over to the iFixit website for a full run through. To re-cap the HTC One M8 is equipped with a 5-inch display sporting a resolution of 1920 x 1080 pixels, and is powered by a quad-core 2.3GHz Snapdragon 801 processor supported by 2GB of RAM,

Other features include a choice of either 16/32/64GB storage with microSD card slot, 2,600 mAh battery with extreme saving mode, 2 megapixel front facing camera for video calling, together with a 5 megapixel rear facing for video and photographs all running Android 4.4.2 KitKat with Sense 6.0 technology installed.