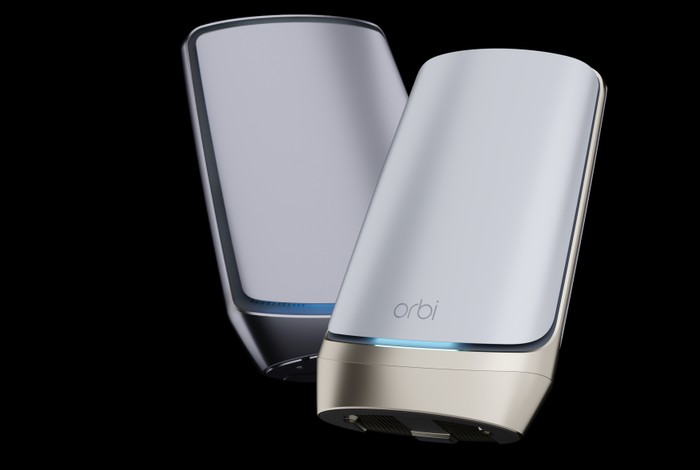 “Devices running on the 2.4 GHz and 5 GHz WiFi bands will also experience an improvement in coverage and increased speeds of up to 30 percent with the Orbi RBKE960 Series due to the system’s upgraded WiFi radio and antenna designs relative to the previous flagship model, the Tri-band Orbi RBK850 series. To augment the increased WiFi speed, the Internet connection has also been upgraded to support up to 10 Gigabits, the fastest Internet speed available now or in the near term. Additional 2.5 Gigabit Ethernet ports have been added on the router and satellites to provide an option for wired connections for customers with the latest multi-Gigabit Ethernet devices.”

Industry-first quad-band WiFi System – Supports four WiFi bands -2.4, 5 and 6 GHz, for connecting the router/satellite to all your devices and an additional dedicated fourth 5 GHz WiFi band for connecting the router to the satellites.
Supports all-new WiFi 6E 6 GHz WiFi band – The 6 GHz WiFi band adds more than double the bandwidth of 5 GHz, resolving issues with interference and congestion in the 5 GHz WiFi band, and enables amazing multi-Gigabit WiFi speed for connected WiFi 6E devices.
16 WiFi Streams – to provide the best speed, range and performance to blanket your home with Internet speeds similar to what you receive from your Internet provider.
10 Gbit Ethernet port for Internet – Future-proof your home network with support of up to 10 Gbps Internet speeds.
2.5 Gbps Ethernet port for wired connections -Multi-gig Ethernet port for wired connection to network storage, LAN gaming, in-home media streaming, or use it to set up a wired multi-gig connection between the router and satellites with structured Ethernet wiring in your home.
More Flexibility to Manage your Home Network with support for four different WiFi Networks – Main mesh WiFi Network for all your devices using the latest WPA3 for secure connections; IoT Network for all your legacy and IoT devices; 6 GHz Only WiFi Network for all latest WiFi 6E devices and Guest WiFi Network.
Orbi App—Easily set up your WiFi System, manage your network remotely, pause the Internet on any device, track your Internet data usage and more