If you have a computer that has slower or older type of wireless networking connectivity that won’t hit the super fast speeds wireless gear is capable of today you can change the card out if possible. For most folks changing out hardware won’t be a good choice and these uses will need some sort of USB network adapter that supports the faster tech. 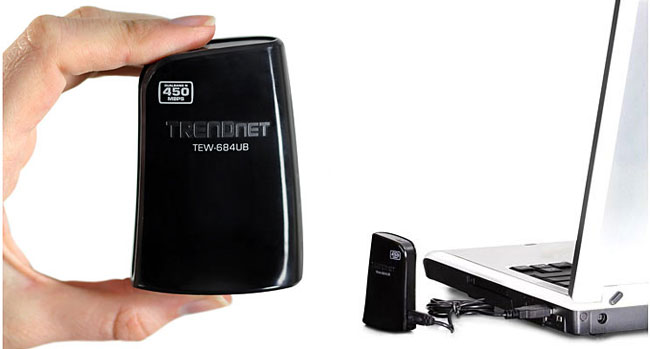 Trendnet has a new USB network adapter for any computer that has a long extension cable to get the adapter away from the computer and to prevent the blocking of other USB ports. The adapter is a dual band offering that will work at 2.4GHz or 5GHz as well. That means that HD video and other bandwidth heavy services can use the less cluttered 5GHz band.

The adapter has WPS for easy and secure setup. It also has a MIMO antenna that allows for the fast 450Mbps transfer speeds and helps to make the signal more robust too. The adapter is USB powered and has is model number TEW-684UB. You can order the network adapter right now directly from Trendnet for under $90.