If you enjoy playing Counter-Strike you might be interested to learn that a NES console has been added to a map for its players to enjoy while they are waiting for the other team to get their act together.

The mod has been accomplished using the Sourcemod Entertainment System (SMES), a server plugin which has been designed to allow a video game and play another video game inside itself. Watch the video after the jump to see it in action. Enjoy! 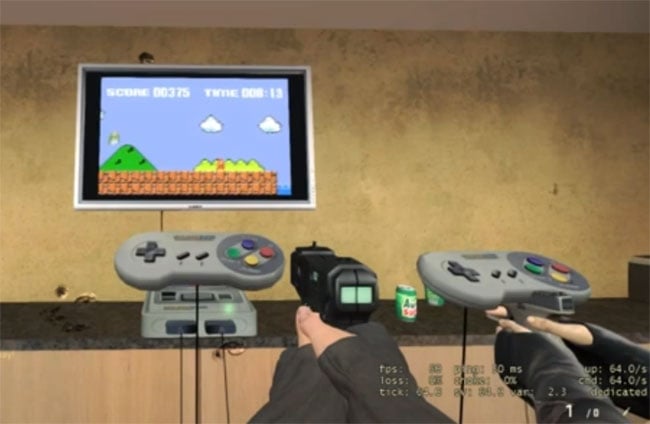 The maps mod has been created by skwumpy, and allows you to pick up a cartridge within the Counter-Strike map, insert it in the console and enjoy a quick game of Super Mario Bros. Its creator explains:

“After months of playing with CS:GO modding, I stumbled upon this strange idea: playable video games! The system originally was just going to be direct input to the TV in cs_office, but I got a bit carried away! The system now features a video game console, game cartridges, controllers, and wires to connect them!!

There is only one game right now, which took a while to make, its called Super Mareo, its a bit different from real Mario but it uses ripped NES SMB sprites 🙂

The game only has one level, but I spent quite a bit of time polishing it and tweaking it so it is possible to speed-run it while killing all goombas and getting all of the coins. It also has a 2 player mode which allows two characters to play at the same time! (and yes the console supports two players of course!)”