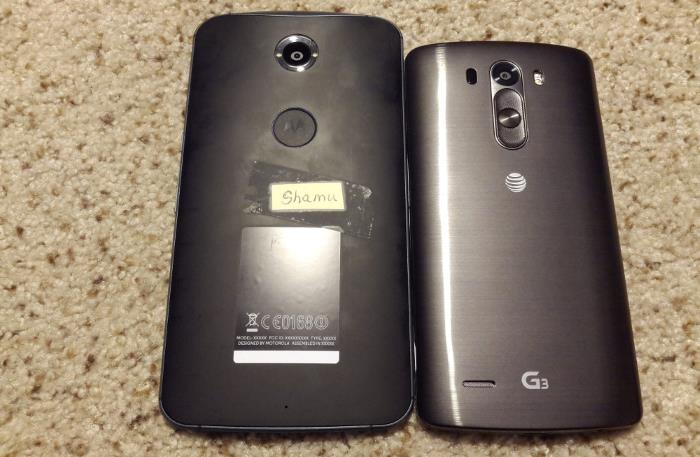 Yesterday, we saw a mockup render of the alleged Motorola Shamu, which is said to be the next Nexus device, but with a considerably bigger display. The report further mentioned it’s a scaled up Moto X, with a massive 5.9-inch display.

Recently, an anonymous guest posted an image of the alleged Motorola device on Droid-life’s comments section, believed to be the upcoming Nexus handset. There’s no confirmation to it, but it could very well be the Nexus X or whatever it will be called.

As you can see from the image above, an oversized Moto X type device is placed alongside the LG G3, and looks considerably bigger. LG G3 is already a big handset with a 5.5-inch display, so the handset we see in the picture could be around 5.9-inch, the size of display which is expected to debut with the Motorola Shamu.

As for the internals, previous rumors suggest it will come with a 5.9-inch display sporting a resolution of 2560 by 1440 pixels with a 498ppi pixel density, a quad-core Snapdragon 805 SoC with 3GB of RAM and 32GB of internal storage. Other features include 13MP camera for photos and videos, a 2MP front-facing camera, a 3,200 mAh battery and should come with Android L as its operating system.

Let’s just take this rumor with an appropriate amount of salt. The image was posted by an anonymous user claiming the device will land on Verizon. This could be fake, but let’s just wait for Motorola or Google to make things official. Rumors suggest Google will launch the upcoming Nexus device in mid-October followed by November availability. We’ll update you as soon as more information comes up.