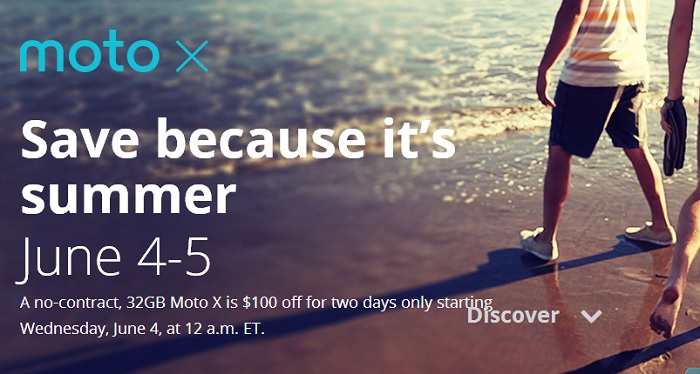 This isn’t the first time Motorola has offered a discount on the highly customizable Moto X. Last month, Motorola offered a one day sale on the Moto X, reducing it’s price to $299.99 for the 16GB model, while the 32GB model was available for $324.99.

If you couldn’t get the discounted Moto X last month, don’t worry as Motorola is offering a $100 discount promotion on the Moto X once again, but it’s on the 32GB model only. You can get the 32GB Moto X for a $100 off, bringing its price down to $299.99 off-contract.

As a quick reminder, the highly customizable Moto X comes with a 4.7-inch display sporting a resolution of 1280 by 720 pixels, a dual-core Snapdragon processor with 2GB of RAM, 16GB storage, 10MP rear camera, 2MP front-facing camera, a 2,200 mAh battery and runs Android 4.2.2 as its operating system — upgradable to Android 4.4 KitKat.

It could also mean that Motorola is trying to clear up its inventory before the launch of the successor of Moto X. Rumors suggest Moto X+1 is in works, and is expected to see the light of the day in summer. We’ll update you as soon as we get more information about it.