The affordable Moto G has seen its fair share of rumors this month. Earlier this month, we saw some leaked specifications of the handset as well as its pricing. The Google-owned company is expected to unveil the handset on 13th of November and will also live stream the event online.

Now, the notorious Twitter leaker @evleaks posted an unofficial press render of the handset, which looks similar to what we’ve seen in the past. It seems that the handset will launch in multiple colors and will hit Verizon as well, which can be guessed by look at the Verizon logo on the back. 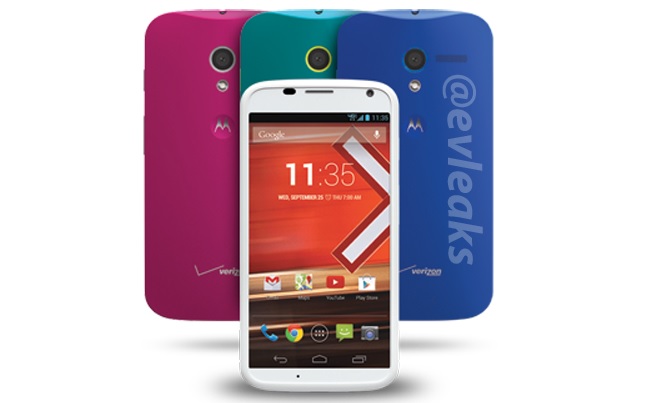 Rumor has it that the handset will feature a 4.5-inch display boasting a resolution of 1280 x 720 pixels with 329ppi pixel density. Motorola Moto G is powered by a quad-core Snapdragon processor clocked at 1.2GHz. Some rumors suggest the processor will come with a clock speed of 1.5GHz, but let’s just go with the 1.2GHz one. There are no details about the RAM, but we’re wildly guessing it to be 1GB at least.

Other features include 8 internal storage, 5MP camera at the back capable of recording 720p videos with a 1.3MP front camera, WiFi, Bluetooth, 1,950 mAh battery and will run Android 4.3 Jelly Bean out of the box. Rumors suggest that the handset will come with an extremely affordable price tag of zero on-contract. There are no details about the off-contract pricing in the US, but a few rumors mention it will be £134.95 off-contract in the UK. For this price, it’s definitely going to be an amazing option for users looking for a mid-range smartphone.

We’ll find out all the details about the long-rumored Moto G in less than a week. Until then, let’s just keep our fingers crossed and see what Google and Motorola has planned for is customers.