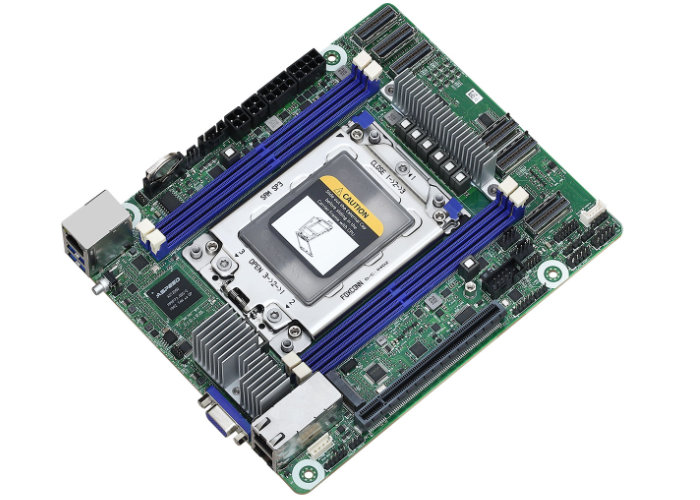 ASRock has introduce their new mini ITX motherboard in the form of the Socket SP3 motherboard in ‘Deep Mini-ITX’ form-factor. Featuring a socket SP3 and supports AMD’s EPYC 7002-series processors in the LGA4094 packaging.

“The motherboard has four DDR4 memory slots that support RDIMM and LRDIMM modules of up to 256GB capacities (to be validated) and therefore up to 1TB of DRAM in total at up to 3200 MT/s. The platform also features one PCIe 4.0 x16 slot for an accelerator or a graphics card, one M.2-2280 slot (PCIe 4.0 x4 or SATA) for SSDs and six slimline connectors for U.2 drives (PCIe 4.0 x8 or SATA). Internal I/O of the platform is good enough both for servers and workstations. In addition, it also carries the ASPeed AST2500 baseboard management controller (BMC).

The ASRock Rack ROMED4ID-2T includes an Intel X550-AT2 10 Gb controller, which adds two 10 GbE ports on the rear panel, as well as a dedicated Realtek RTL8211E Ethernet port for the board’s IPMI. A single DB15 D-Sub video output is present for users looking to access the system physically over the IPMI, with a UID LED button and a pair of USB 3.2 G1 Type-A ports.”