Gone are the days of F8 key tapping to bring up boot options. Within Windows 8 users will be presented with a clear and user friendly interface provide all the options you might need. 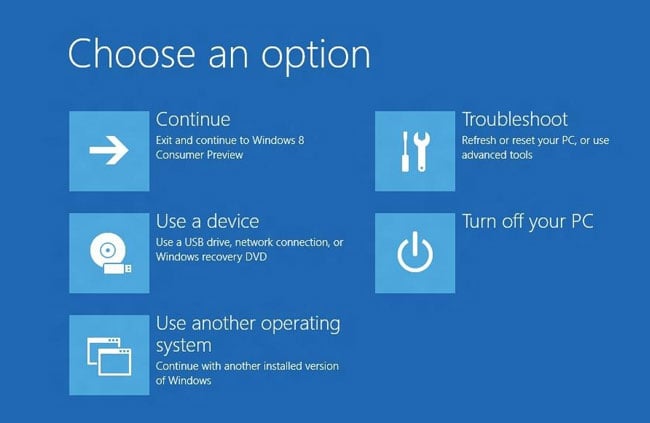 Within the new boot screen users are provided with options for booting from a USb device or network connection, booting another OS, together with troubleshooting guides and simply continue or turnoff options. Microsoft explains:

“Fast booting is something we definitely want to preserve. Certainly no one would imagine intentionally slowing down boot to allow these functions to work as they did in the past.

Most of the decisions about what will happen in boot are over in the first 2-3 seconds – after that, booting is just about getting to Windows as quickly as possible. These 2-3 seconds include the time allowed for firmware initialization and POST (< 2 seconds), and the time allowed for the Windows boot manager to detect an alternate boot path (< 200 milliseconds on some systems). These times will continue to shrink, and even now they no longer allow enough time to interrupt boot as you could in the past.”

For more information on the new Windows 8 boot options, jump over to the detailed blog post over on the Microsoft website.