Back at the beginning of this year Microsoft unveiled a new project they had been working on called Microsoft IllumiRoom which provided a more interactive gaming environment by expanding the gaming screen into your room and looked like an awesome addition to games. 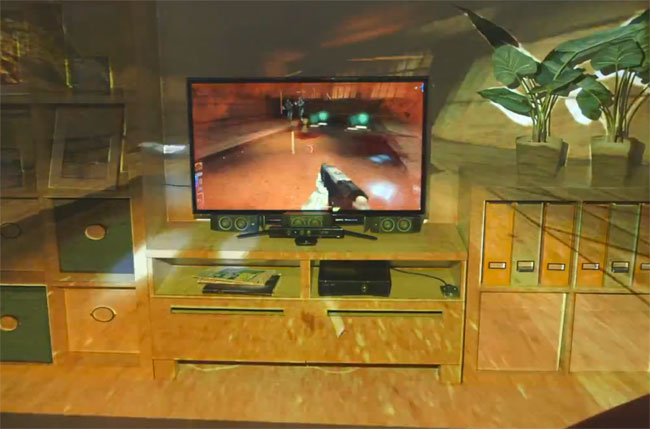 Microsoft IllumiRoom used a Kinect for Windows camera and a projector to blur the lines between on-screen content and the environment to combine the virtual and physical worlds. However it now seems that Microsoft has slidelined the launch of the project due to the high than expected consumer cost of the device. Microsoft is still developing the Microsoft IllumiRoom project just don’t expect to see it launching any time soon.

The Microsoft IllumiRoom project was a proof-of-concept system from Microsoft Research that augmented the area surrounding your television screen with projected visualisation to enhance gameplay and the immersive appeal of the mediator game you were playing. Watch the video below to see it in action and learn more.

“Our system uses the appearance and the geometry of the room (captured by Kinect) to adapt the projected visuals in real-time without any need to custom pre-process the graphics. What you see in the videos below has been captured live and is not the result of any special effects added in post production.”

For more information on the new Microsoft IllumiRoom jump over to the Brett Jones website for details.