Anyone who enjoys building electronic devices that might be considering making some wearable technology, adding to the currently available smartwatches, wristbands and jewellery that is already available.

Might be interested in a new tiny Bluetooth module called MetaWear which is available to purchase for $30 and is capable of helping you create wearable tech within 30 minutes, say its creators. 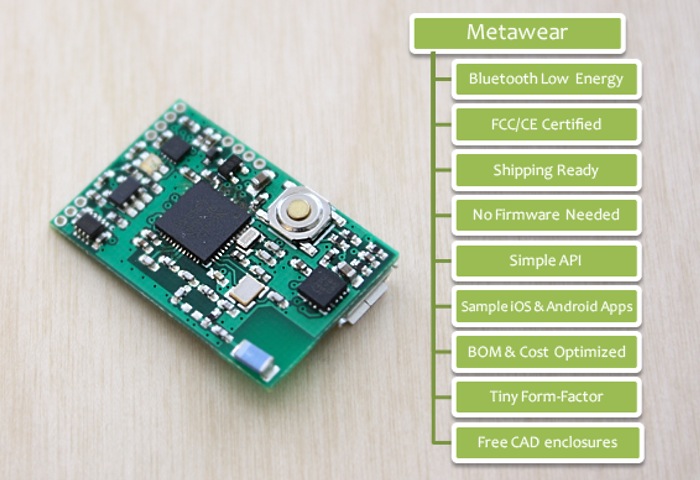 MetaWear takes the form of a tiny production ready, certified, and cost optimised board. MetaWear is the world’s first development and production platform that has been designed specifically for Wearables. To learn more about this new MetaWear development board watch the promotional Kickstarter video below to learn more.

“Everything works right out of the box so you can build prototypes in 30 minutes or less. Simply download or fork the app on Github and with the MetaWear board you have a production quality prototype from the start. Customize the Android or iOS App any way you like.

We love development boards, they are great for prototyping but they can only take you so far. Traditional development boards have a lot of shortcomings including size, cost, and scalability. A Raspberry-PI doesn’t fit into a necklace, a bracelet, or a shirt. You cannot send an Arduino prototype to a factory or ship it to your customers door. MetaWear removes the step between prototype and fabrication; it is built with simplicity and manufacturability in mind.”

The MetaWear project is currently over on the Kickstarter crowd funding website looking to raise enough pledges to make the jump from concept to production. So if you think MetaWear is something you could benefit from, visit the Kickstarter website now to make a pledge and help MetaWear become a reality.