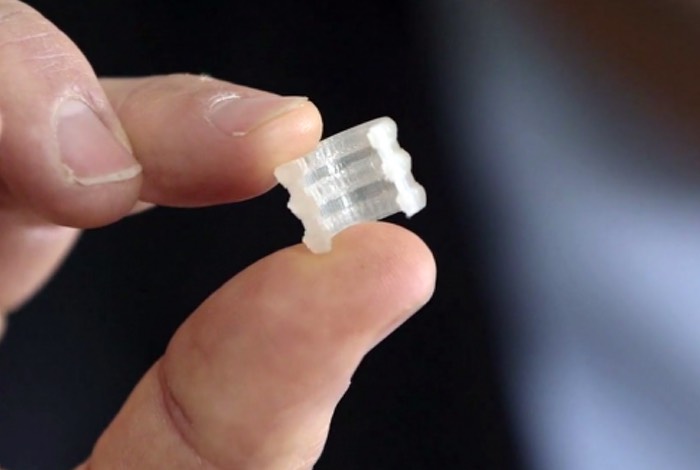 Medical researchers at the Feinstein Institute for Medical Research have used a MakerBot 3D printer to form tracheal cartilage, using the new 3D printing technology to create prototypes and refine the bioprosthesis.

The 3D printer has been used to help create the right shape for the process to start growing and in the past has always proved difficult for researchers to carry out.

Medical researchers used a MakerBot Replicator 2X Experimental 3D Printer to create a scaffolding for the cartilage that was then covered in a bio-ink consisting of the mixture of collagen and chondrocytes. The PLA-constructed frame provides structure to the mixture as it grows into cartilage, say the team. Todd Goldstein, an investigator at the Feinstein Institute explains :

“Making a windpipe or trachea is uncharted territory’”-“It has to be rigid enough to withstand coughs, sneezes and other shifts in pressure, yet flexible enough to allow the neck to move freely. With 3D printing, we were able to construct 3D-printed scaffolding that the surgeons could immediately examine and then we could work together in real time to modify the designs.

MakerBot was extremely helpful and consulted on optimizing our design files so they would print better and provided advice on how to modify the MakerBot Replicator 2X Experimental 3D Printer to print with PLA and the biomaterial.

We actually found designs to modify the printer on MakerBot’s Thingiverse website to print PLA with one extruder and the biomaterial with the other extruder. We 3D printed the needed parts with our other MakerBot Replicator Desktop 3D Printer, and used them to modify the MakerBot Replicator 2X Experimental 3D Printer so that we could better iterate and test our ideas..”

For more information on the new advances in the field of cartilage creation using 3D printing technology jump over to the Feinstein Institute website for details via the link below.