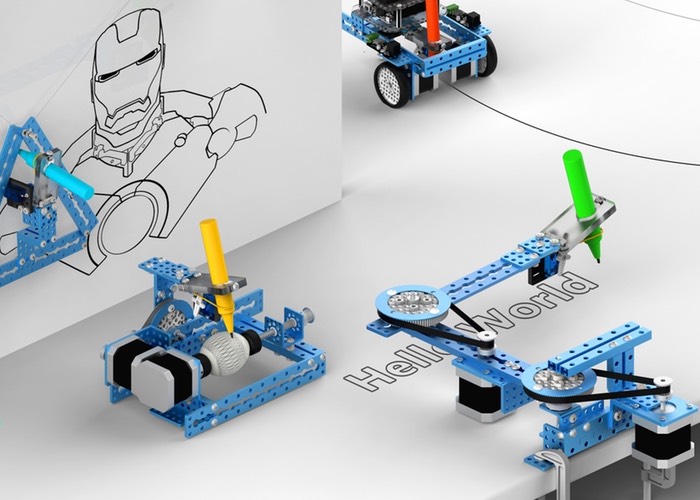 The mDrawBot drawing robot kit includes everything you need to create four different drawing robots in the form of the mScara, mCar, mSpider and mEggBot, watch the video below to learn more about this awesome Kickstarter project which has already blasted past its $50,000 pledge goal. 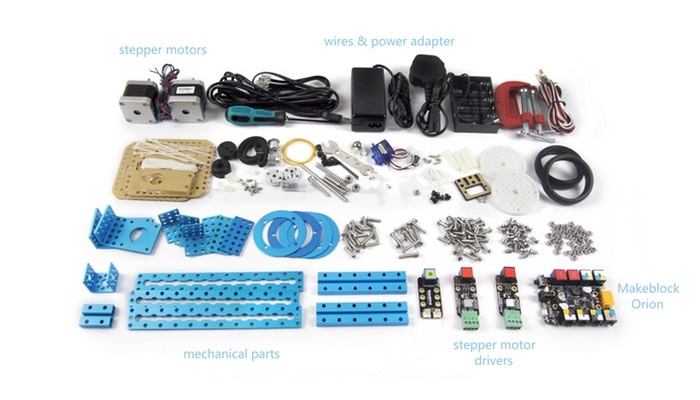 “This mDrawBot kit consists of Makeblock parts and we also designed a powerful software named mDraw to control these robots. mDrawBot contains over 60 components (and countless screws and nuts), here’s the picture of all the components.

mScara is a SCARA (Selective Compliance Articulated Robot Arm) driven by stepper motors. If you install a pen on mScara, it can draw pictures on a flat surface. Replacing the pen with a laser diode, it can turn into a desktop laser engraver.

mSpider is a drawing robot which can draw pictures on a wall or a white board. Two stepper motors control the movement of mSpider though strings. Theoretically, it can draw in a huge range by increasing the length of strings.

mEggBot is designed to draw on things that are improbable to print on, such as eggs or ping-pong balls. It can be used to write letters or to draw expressions on eggs, or to draw Easter eggs.

mCar is a three-wheel robot car. It contains two stepper motor drive wheels and a ball caster wheel. It can draw its own movement tracks on the surface. If you install a chalk instead of a pen, it can draw on the floor.”

The mDrawBot project is currently over on the Kickstarter so if you think mDrawBot is something your school or household could benefit from, visit the Kickstarter website now to make a pledge for your very own kit.