This week Makerbot has launched their new Makerbot Replicator 2 3D printer, which has built on the technology unveiled in their original Replicator during CES. 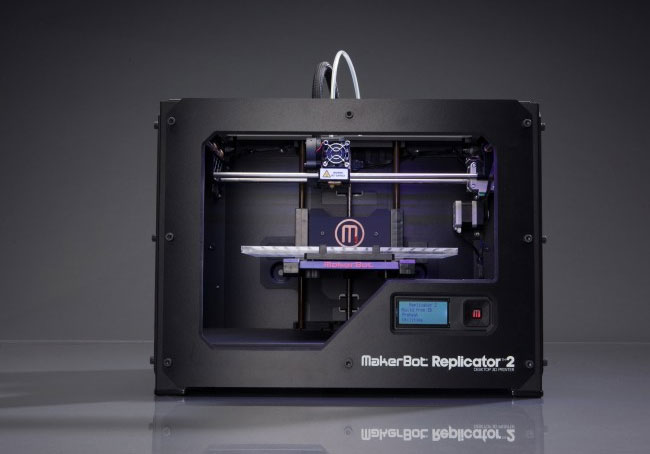 Other new features of the Replicator 2 3D printer include a new simple GUI that allows you to load multiple STL or OBJ files at once, together with :

– 100-micron layer resolution – If you know our machines or 3D printing in general, you understand this advancement. The original Replicator was tuned for a 270-micron layer height. 100 microns is nearly three times finer than before, which means the layers are even harder to see and feel. For those keeping score, 100 microns is also a good bit finer than the output on some much more expensive machines.

– Huge 410 cubic inch build volume – MakerBot desktop 3D printers have never had a build volume this big. When we learned more about PLA, which works beautifully with huge builds, we knew we had to increase the build volume. This is 37% larger than the original Replicator. You can make entire projects on one build plate.

– Optimized for MakerBot PLA – Polylactic Acid, derived from corn, has been in our repertoire for a little while, but now we’ve discovered its full power. It doesn’t have an odor, it sticks without sliding, and it makes beautiful things. That’s all there is to it.

– Sleek, sturdy steel – The powder-coated steel frame of the MakerBot Replicator 2 Desktop 3D Printer gives it all the strength it needs for high print speeds. Plus it’s resistant to changes in temperature and humidity.

– Smart new parts — The acrylic build plate pops out for you to grab things easier, and the bearings are oil-infused so you spend less time.

The new Makerbot Replicator 2 3D printer is expected to start a shipping early next year and is priced at $2,799.