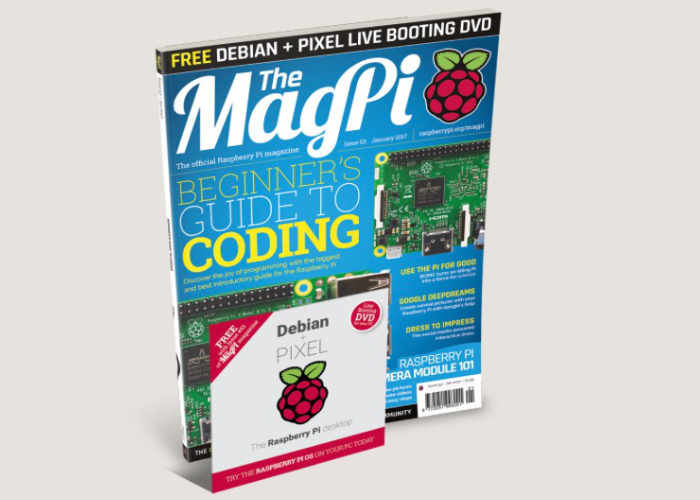 Raspberry Pi enthusiasts will be pleased to know that the latest Raspberry Pi MagPi magazine is now available to download and purchase and comes complete with a free Debian + PIXEL DVD.

Earlier this week the Raspberry Pi Foundation announced the launch of the new PIXEL desktop operating system which is now available for both Mac and PC systems and is now available with the latest edition.

MagPi 53 in stores today such as WHSmith, Tesco, Sainsbury’s, and Asda in the UK, as well as the Micro Center and selected Barnes & Noble stores in the US. You can also buy the print edition online from theOfficial Raspberry Pi store, and it’s also available digitally via the Android and iOS applications.

The Raspberry Pi Foundation explains a little more about what you can expect in the latest edition, with plenty of projects to keep you busy during the holiday season.

Launching alongside this month’s The MagPi are more international titles. The second edition of our bite-sized version of The MagPi, translated into four languages, is now available. The MagPi Translated Edition 2 contains the best projects, reviews, and tutorials from The MagPi. These are translated into Italian, French, Spanish, and Hebrew.

Here are some of the incredible projects you will find in this month’s The MagPi:

• Google DeepDream: how to create surreal works of art with a Raspberry Pi and Google’s AI software
• Master remote access: use a Raspberry Pi and SSH to connect remotely via the command line
• Make a GPIO Music Box: Program push buttons to make different sounds
• Create a horse race game: Get yourselves to the derby with Pi Bakery
• Use BOINC to donate your Raspberry Pi’s resources to science

There’s a huge amount in this month’s magazine. Here are just some of the features in this issue:

• Beginner’s guide to programming: learn to code with our complete starter guide
• Use the Debian + PIXEL DVD: try out our new OS on your computer with your free DVD
• Create a bootable flash drive that can boot a Mac or PC into the PIXEL desktop

We also cover some of the most fantastic community projects ever built: