If you’re a fan of sports video games odds are you’re a fan of EA Sports Madden NFL. This is easily the most popular sports game on the market and has been for a long time.

Each year we a start working on the new version of the video game it kicks off voting to give players a chance to choose which athlete will be featured on the cover of the video game. The Madden NFL 25 Cover Athlete voting for this year is now underway. 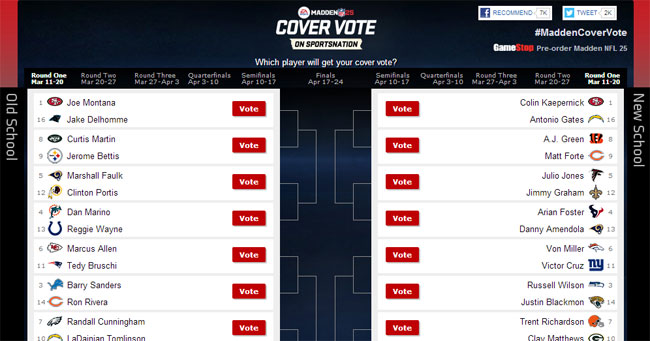 There are also a number of new players including Jimmy Graham, Julio Jones, Andrew Luck and a bunch more. The first round of voting kicked off on March 11 and ends March 20. Round two starts on March 20, and ends on March 27.

Round three picks up on March 27 and lasts until April 3. On April 3, the quarterfinals kick off before ending on April 10 with the semifinals running from April 10 to the 17th and the finals spanning April 17 through the 24th. It would be cool to see one of these old-school athletes win the vote, I’d rather like to see Troy Aikman on the cover of the next Madden game.