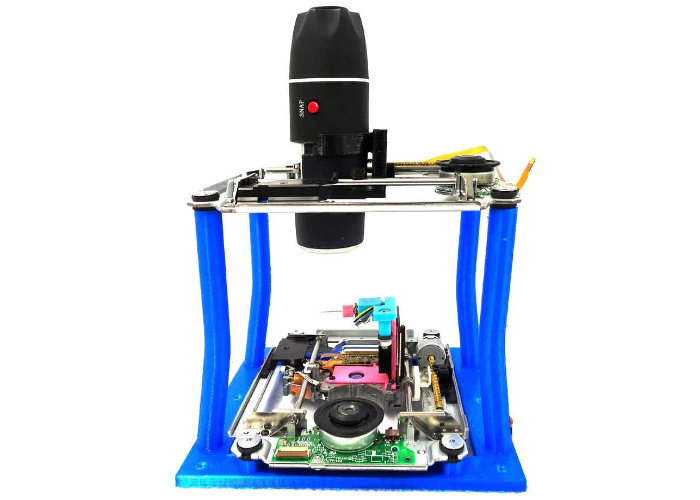 A unique photography system has launched via Kickstarter this week designed to enable users to capture issued stunning panoramas of the microscopic world. Created and developed by Ahron Wayne, the photography platform can also be used to create three-dimensional photographs and is available via Kickstarter from $249 with worldwide shipping expected to take place during December 2020.

“There are a lot of ways you can actually implement a scanner like this in practice, and the available rewards reflect that. I started this project during my Master’s degree in biomedical engineering more than two years ago now, and had budget and size as absolute priorities. I ended up basing the entire system around two old Playstation-3 Blu-Ray drives and the cheapest USB microscope I could find.

My intended application was for in-incubator, timelapse scans of living animal cells. Then, I got distracted by a tiny little linear stepper motor from inside the Blu-Ray player, which is normally used to move a single lens back and forth. Could you use that to move a stage, like for a coverslip? And then if you’re already doing that, what’s the reason you can’t clip in an even tinier little rotary stepper motor and lift that up instead? And so, several years and thousands of 3D printed parts later, the design was polished and put to work as a 3D scanning microscope for small things, made almost entirely out of Blu-Ray players.”

“My new system is based on a CNC or 3D printer, which I call LadyBug Beefy. You can read about it over on my Hackaday blog, but just consider it the Blu-Ray version’s bigger, sturdier twin, and with a better camera! It even has a fifth axis, allowing you to really “fly” around the thing you’re inspecting. My plan is to base the final system on a core “XYZ” gantry printer — where only the camera moves in the linear dimensions, making it much easier to mount your object when doing 2D scanning. If you are seriously interested in this, please reach out to me directly, and I will give you some one-on-one support. “