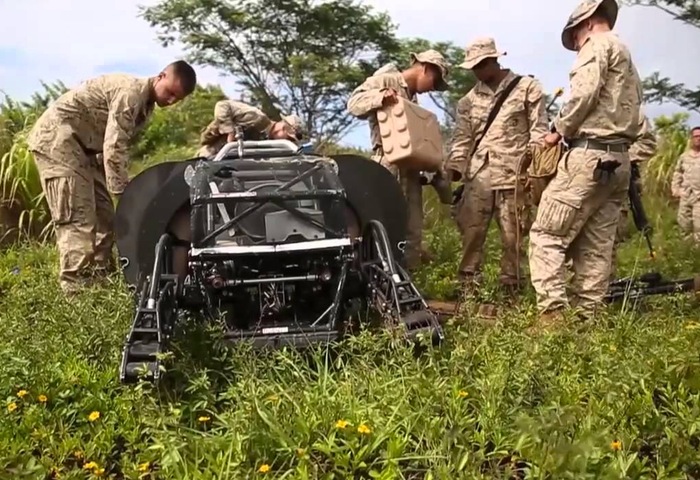 The LS3 Robot developed and created by Boston Dynamics was unveiled a number of years ago but since then has undergone the development process that has enabled it to now be field tested by the USMC over rough terrain.

The LS3 Robot is an experimental technology built by Boston Dynamics which is now owned by Google and is a robotic carrying frame has been designed to provide the army with a robotic Mule that is capable of carrying large loads through jungle and forest environments. Taking supplies to areas where further vehicles could not reach.

“The robot is being tested by the Marine Corps Warfighting Lab as part of the Advanced Warfighting Experiment during Rim of the Pacific 2014. The robot is funded by DARPA and the U.S. Marines. LS3 automatically follows its leader using computer vision, so it does not need a dedicated driver.”

The LS3 robot is capable of carrying 400 lbs of equipment as well as enough fuel for a 20-mile mission lasting 24 hours. As you can see in the video below Lance Corporal Brandon Dieckmann controls the robotic LS3 through some thick brush that would normally impassable by other vehicles. Explaining :

“A lot of people don’t think it will be able to handle the terrain that it does, I’d see about 70 to 80 percent of what we can go through it can actually get through,”