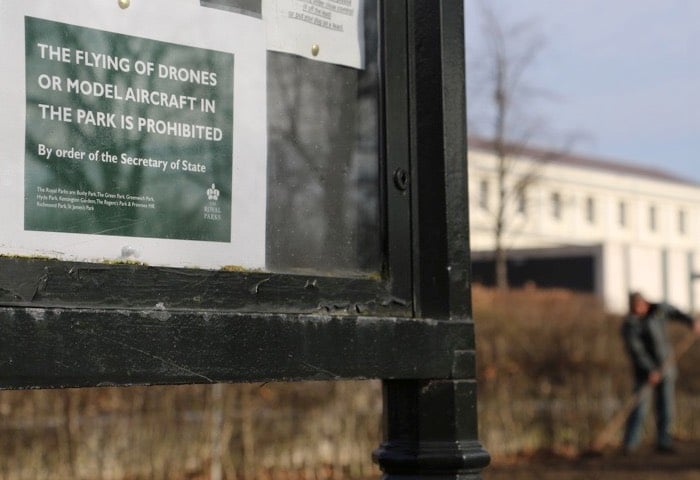 The UK Secretary of State has this month banned anyone from flying remote-controlled drones in any of London’s Royal Parks adding to the laws that are now restricting the flying of drones within public areas.

The UK aviation law also states that it is illegal to fly drones, within 50m (164ft) of a building or person and a drone must always be within 400 vertical feet and 500 horizontal meters of its pilot.

It is common knowledge that The House of Lords EU Committee is already debating tougher guidelines for flying drones in the UK but until that law is passed you can expect more signs in the form of the one above to appear in public places. The daily mail reports today :

“Drones have been banned from parks near Buckingham Palace and other senior Royals’ homes amid fears they could be used by spies or would-be terrorists. The remote-controlled aircraft cannot be used in any of the open spaces near the Queen’s London residence.

Signs have gone up in every Royal park across the capital warning: ‘The flying of drones or model aircraft in the park is prohibited.’ A Royal Parks spokesman insisted the signs could also be found far away from palaces, including Richmond Park and Greenwich Park.”