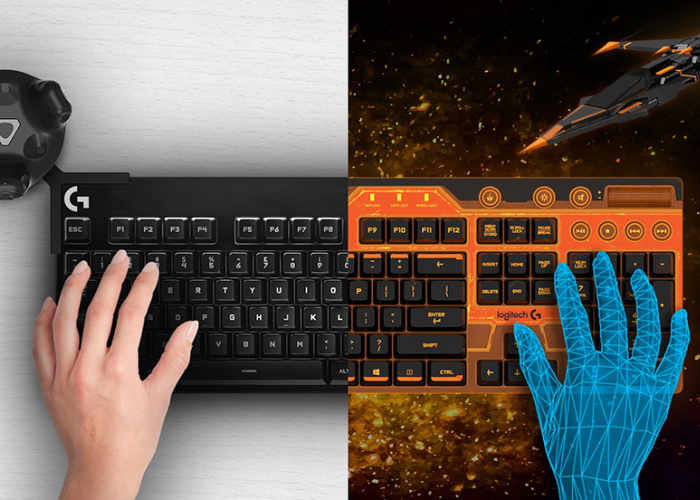 Valued at $150, Logitech is currently seeding 50 of these kits to select developers with the goal of partnering to create compelling new experiences centered around a VR keyboard, if you are interested in being put forward to receive a BRIDGE developers kit jump over to the Logitech website by following the link below to enter your details. Darshan Shankar, Founder and CEO, Bigscreen, Inc explains :

We’ve been working with Logitech over the past year and think what they’ve created is the solution we all need. Virtual keyboards are great for simple interactivity, but for productivity and collaboration there’s nothing quite like the tactile feel of typing on an actual physical keyboard. Being able to see your keyboard in VR makes it significantly easier to type and interact with our computers.

The system is currently in its beta development stage and is purely a proof of concept to spark discussion and feedback at the current time says Logitech and HTC Vive who explain a little more.

We had a challenging problem to solve within the constraints of the existing system. Early on, we worked with some key development partners like Virtual Desktop, BigScreen and Autodesk, among others and surveyed the community to ask about their experiences and built toward this day based on what we’d learned. The result? We’ve created a way for the HTC Vive Tracker to represent a keyboard across the Steam VR system. It is this software piece that presents the user with an overlaid virtual representation of their keyboard in any VR application, complete with animations when keys are pressed. It’s compatible with all apps that are developed based on SteamVR. The developer’s application does not need to manage anything, the overlay appears automatically as soon as the associated Vive Tracker is turned on. It also affords the opportunity to skin the keyboard in a variety of ways, as mentioned above, allowing developers to create unique experiences for their communities.

Jump over to the HTC Vive website for more details on the new virtual reality keyboard by following the link below.