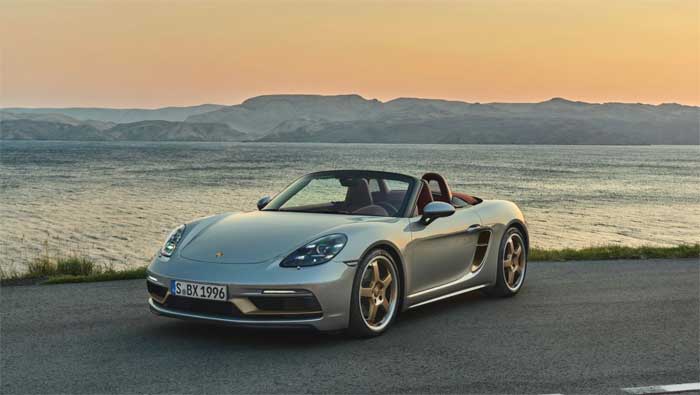 Porsche has launched a new limited edition of its mid-engine convertible sports car called the Boxster. The special model is the Boxster 25 Years, and it’s based on the 718 Boxster GTS 4.0 model. That means the car has a 394 horsepower naturally aspirated 4.0-liter six-cylinder engine.

Porsche will make only 1250 units worldwide, and it has multiple design features from the original Boxster concept shown at the 1993 Detroit Auto Show. Porsche says that since the Boxster launched, it has produced 357,000 units. The car is GT Silver Metallic with Neodyme wheels and accents, which is a copper color.

The interior is Bordeaux Red with a red roaster top made from fabric. The top has embossed Boxster 25 lettering. Buyers wanting something more subtle can also get the special model with a black roof and interior. A heated GT multifunction sport leather steering wheel is also part of the package. Buyers can get the car with a six-speed manual or seven-speed PDK. The Sport Chrono package is standard, and the car can reach 60 mph in 3.8 seconds. The MSRP is $98,600 plus $1350 destination charge.