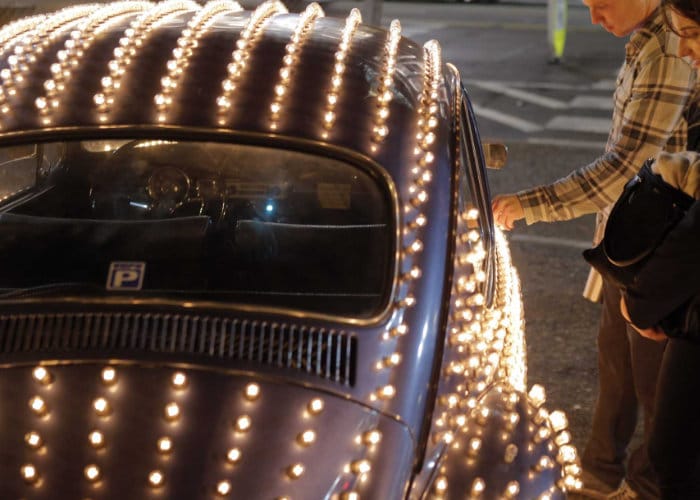 Fans on the iconic Volkswagen Beetle are sure to enjoy the Lightmobile created by Eric Staller which has been making its way around the world for quite some time and is covered with 1649 individual lamps that are all computer-controlled and capable of providing 20 different patterns. Eric explains that he has “shared it with hundreds of thousands of people on the streets of New York, Chicago, Boston, Montreal, Amsterdam, Basel, Berlin, Brussels and Nagoya”.

The Lightmobile is part of Eric’s Urban UFO commissioned art collection and has been seen in different locations around the world since its creation. Eric Staller is an American artist born born in 1947 who uses light and architecture as a medium to create and design works of art. “By the late 1970s Staller was called “The Light Master” where he made a name for himself using sparklers and other means of light to outline the streets of New York City. He used long-exposures to photos, creating the illusions of light art, which can also be called light painting.”

The Volkswagen Lightmobile is a 1967 Volkswagen Beetle covered with 1659 computerised lights and was completed in March 1985 And took five months to build. His creation has appeared in the 1986 movie Money Pit starring Tom Hanks.