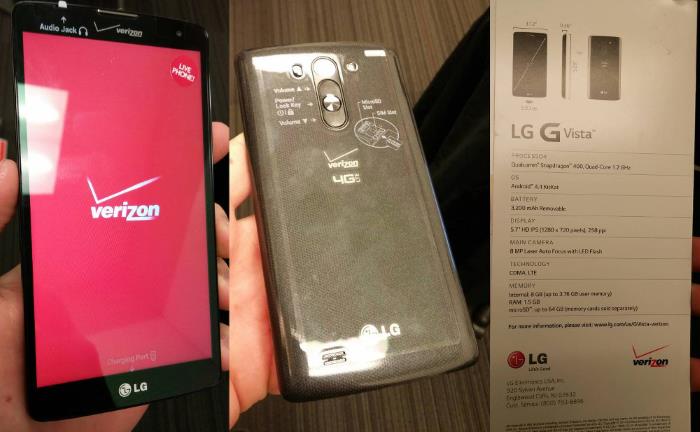 Earlier this week, a leaked image revealed some specifications of the LG G Vista, along with its rumroed 31st July launch date.

Now, some new leaked images gives us another look at the alleged LG G Vista from front and back, along with the complete specifications it will bring on the table.

According to the folks at Droid-Life, LG G Vista is set to launch on July 31st for  $99.99 tied to a two-year contract with the Big Red. Customers who don’t want to sign up a contract with the carrier can get it for $499.

The alleged LG G Vista comes with mid-range specifications on board, and rocks a 5.7-inch display sporting a resolution of 1280 x 720 pixels resolution. The leaked image suggest that it will come with a quad-core Snapdragon 400 SoC clocked at 1.2GHz with 1.5GB of RAM and 8GB of internal storage with a microSD card slot for expansion.

On the rear, it’s said to come with an 8MP camera with the same laser auto focus introduced with the LG G3, as well as a 2MP front-facing camera. Other rumored features include a 3,200 mAh battery, LTE support, and runs Android 4.4 KitKat as its operating system out of the box.