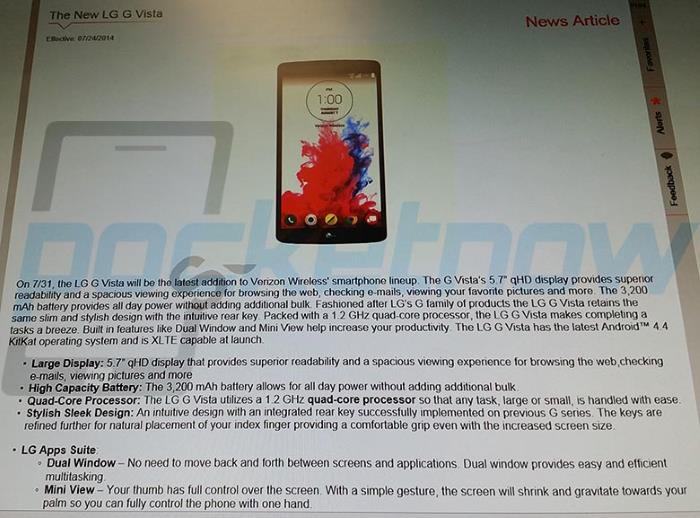 Over the weekend, a user manual of the alleged LG G Vista made its way on to the internet, revealing that the purported handset will make its way to AT&T too.

Now, another leak has revealed more details about the specifications of the alleged LG G Vista, which is said to launch on AT&T and Verizon in the US in the near future.

The folks at PocketNow received an image which details the specifications of the rumored device, and also mentions that Verizon will launch the handset on July 31st.

The same image also revealed that LG G Vista will come with a 5.7-inch display with a qHD resolution (960 by 540 pixels) while we previously heard that it will come with 720p resolution. Under the hood, there will be a 1.2GHz quad-core processor — could be the Snapdragon 400 we heard in the earlier rumors.

There’s a massive 3,200 mAh battery as well to make sure the phablet can provide a decent battery time. On the software front, it runs Android 4.4 KitKat as its operating system out of the box.

The leaked slide didn’t reveal the remain specifications, nor its price at Verizon, but 31st July is just around the corner. We’ll find out more about the handset soon enough. Stay tuned, we’ll update you as soon as the handset is officially announced by Verizon, or AT&T.