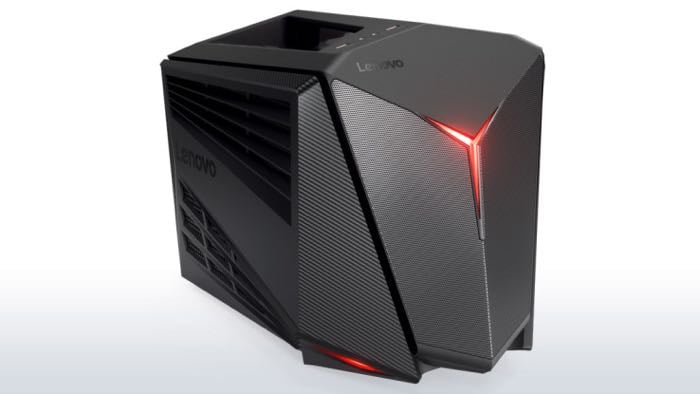 Both of these new gaming PCs have been designed with VR in mind and come with a choice of top end hardware including Intel I7 processors, NVIDIA GeForce GTX 1080 graphics and up to 32GB of RAM.

Ideal for gamers who want to stay competitive no matter where they play, the IdeaCentre Y710 Cube comes with a built-in carry handle for easy transport between gaming stations. Housed sleekly within a new, compact cube form factor weighing only 7.4 kg, it features up to NVIDIA®’s latest GeForce® GTX 1080 graphics, up to 6th Gen Intel® Core™ i7 processor and up to 32GB of DDR4 RAM to handle today’s most resource-intensive releases. The IdeaCentre Y710 Cube lets players confidently handle 4K gaming, VR and high-quality streaming with massive computing capabilities in real time, as well as multitask between editing a spreadsheet and streaming a movie.

The IdeaCentre Y710 Cube comes with up to lightning-fast Killer™ DoubleShot™ Pro Wi-Fi, Windows® 10 Home, up to integrated Dolby Audio™ and up to 2TB HDD (hard disk drive) or up to 256GB SSD (solid state drive) storage, letting gamers enjoy their entire gaming libraries. For those who want even more control in their favorite games, the Cube also comes with the option of an integrated Xbox One™ Wireless receiver including one Xbox One Wireless controller. The receiver supports up to eight Xbox One controllers simultaneously for endless hours of gaming sessions with friends. Additionally, the system offers players the option to bundle peripherals like the Lenovo Y Series Gaming Mechanical Keyboard and Precision Mouse.

You can find out more details about these new gaming PCs from Lenovo over at their website at the link below.